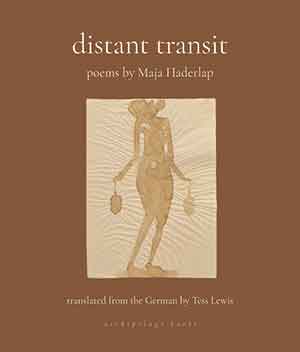 WITH DISTANT TRANSIT, her new poetry collection in English, Maja Haderlap returns to the questions that inform her prizewinning novel, Angel of Oblivion (2016). Born into Austria’s Slovenian-speaking minority in Carinthia, Haderlap grew up with two languages: one of the hearth, the other of often hostile officialdom. Just as they inform her writing, these languages freight her identity: as an Austrian she is marginal to Slovenia; as a Slovenian she is inconvenient to Austria, a reminder of the dark days when the only good Austrian was a German-speaking Austrian. It is no accident, then, that Haderlap’s poems evoke a world whose inhabitants are never quite themselves, aliens even in their own homes. In “it could be a woman who shows,” she states this explicitly: “my mother comes to me during the night. / she points toward the valley. all of this / does not belong to us, she says.” Who are we, then, the poet asks, if the valley where my people have lived for centuries is not our valley?

If we are nothing else, Haderlap suggests, we are our language. Whether she writes about tiny locales on Slovenia’s tiny coast, neighboring Italy, as in the significantly titled “trieste trst triest,” a heartbreak in Madrid, or a legendary Slovenian king, Haderlap’s poems have grown from that “zone of darkness between all languages,” that “black river that swallows words / and stories and transforms them” (“translation”). Often central to her poems, just as often at their margins but inescapably present nonetheless, language is for Haderlap both hearth and prison: “language / kept me in thrall to the world but left me / unsatisfied” (“house of old languages”).

Fortunately, Haderlap is too self-aware and too honest a writer to let her poems slide into maudlin nostalgia. She doesn’t long for some bucolic homeland or heroic past in the valley that doesn’t belong to her, any more than she longs to speak only Slovenian or German or any other language. On the contrary, she embraces that zone of darkness, the transformations that each language necessarily effects on our experience, to write of the past as part of the present, and of herself in this present, a woman trying to make sense of a bewildering world and her ever-changing place in it.

In “my grandfather’s escape from the black sea,” for example, Haderlap speaks to her grandfather who disappeared while trying to get home from the Eastern Front. We don’t know if he deserted or if the war was over. Nor do we know if he drowned or if he died somewhere on land: “did you ever / . . . reach the tide that, from the very beginning, / swept all losing armies through the gorge of the Bosporus.” This poem is about the poet’s grandfather, the past, but it is also very much about the present. Haderlap chooses her words precisely: “which border turned you away . . . ?” Who can read just these words and not see the refugees of this last decade facing armed guards with their dogs and razor wire, or calling for rescue from their collapsing dinghies?

Thanks to Tess Lewis’s translations, English readers now have access to a fine poet at her best. We can only hope that more translations of her work will soon be forthcoming.