Songs for the Flames by Juan Gabriel Vásquez 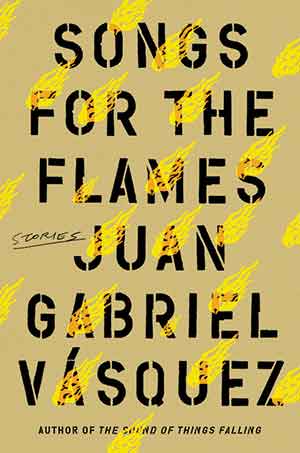 SONGS FOR THE FLAMES is Juan Gabriel Vásquez’s seventh book published in English and his second collection of short stories. The collection also continues his long collaboration with English translator Anne McLean and Riverhead Books.

The nine stories that comprise Songs for the Flames all deal with violence or the memory of violence in some form or another. This is not to say that the stories are themselves violent or depict violence. Instead, and more imaginatively, Vásquez’s writing reflects a world where the legacy of violence is never forgotten; its mechanism is always controlling and dictating the narratives that inform the lives of those who lived in Colombia through some of its most violent historical periods. Roberto Bolaño wrote that “Latin America was Europe’s mental asylum just as North America was its factory.” The legacy of violence and the absurdity that informed and continues to inform that violence is precisely what Vásquez is exploring. He explores violence after the fact; his stories search for meaning in the myriad rippling pools that emerge from its absent center. Bolaño’s astute observation would have made a fitting epigram for the collection, and its logic ties in with the epigraph Vásquez does use from Borges: “I want to know who my past belongs to.”

Taking its cue from the Borges epigraph, Songs for the Flames also explores who has the right to tell a story. This, arguably, is one of the most interesting aspects of the collection. Perhaps no story belongs wholly to one person or group, because the teller is always connected to others. When one tells a story, fictionalized or not, a certain confidence is betrayed. In the lead story, “Woman on the Riverbank,” Vásquez writes: “Other people’s stories are inviolable territory, or that’s how it always seemed to me, because often there is something more in them that informs or defines a life, and stealing them in order to write them is much worse than revealing a secret.” Such is the dilemma of a writer.

“The Last Corrido” tells the story of a musical group called the Marquez Brothers. The narrator, who is a shadow of the author, accepts an assignment to travel around Spain on a tour with the group as they completely revisit a tour they had done in the past. But the story is full of secrets and half-truths, offenses, and innuendo. The lead singer is a younger man who has taken the place of the original vocalist and founder of the group. Like a story from Faulkner, the narrator slowly uncovers the story of what happened on the past tour. The final line of the story is packed with meaning.

“Airport” tells the story of a narrator (again, much like Vásquez) who gets himself involved as an extra in Roman Polanski’s film The Ninth Gate, starring Johnny Depp and Polanski’s wife, Emmanuelle Seigner. The story would be interesting if based solely on that, but Vásquez turns it into a sociological study of Polanski, his first wife, Sharon Tate, and her murder, as well as the concept of place. Moreover, and like many of the other stories collected here, we are asked to consider the role of the creator, in this case a film director.

The stories in the collection all, in some way or another, approach what we now call “autofiction,” which is not really a new concept, despite its name. Each story contains some resemblance to the author. The stories that are written in third person reflect upon the legacy of violence. “The Frogs” contains a sinister undercurrent where violence is always waiting at the door. “The Boys” depicts a violent life that could have been written by Pier Paolo Pasolini. “Songs for the Flames” is the final story in the collection, and it returns us to the autofictionality of most of the other stories.

Immediately upon finishing Songs for the Flames, I wanted to start reading it again but in a different order, and certainly not sequentially from first to last as the reading of a novel demands. In fact, this collection lends itself to nonsequential reading, picking up a story here, a story there, fragmentally and at random. This may be the best way in which to read the collection, choosing to spend time with certain stories and return to others picking up the thread that doubtless links them together: the legacy of violence and the responsibility of storytelling. Juan Gabriel Vásquez is a major voice on the world literary stage, and his fiction does not look away or blink in the face of adversity.