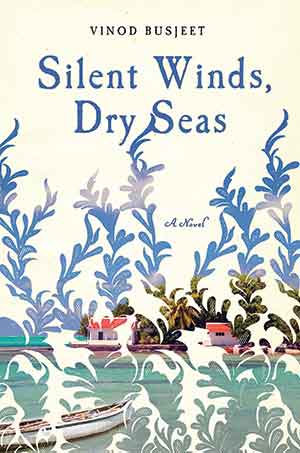 SILENT WINDS, DRY SEAS is one of the first novels by a Mauritian author to be originally published in the United States. Deeply imbued with autobiographical elements, it is a coming-of-age story and a tale of emigration. But most of all, Silent Winds, Dry Seas is a love letter to Independence-era Mauritius.

From the very first page, the narrator, Vishnu’s, story is imbricated within a greater familial and historical context: “We were in my parents’ house in Mahébourg, on the southeast coast of Mauritius, in the Indian Ocean. The first Bhushan, who arrived from India in 1853, moved to this predominantly Creole town after completing his five years of indentured labor on Ferney Sugar Estate.” From this first ancestor begins the sprawling tree that will become the Bhushan clan, a family simultaneously tethered and fractured by love, loyalty, honor, and the occasional court case to settle a land dispute. Vishnu’s narrative voice is funny and endearing; readers are invested in his character arc as he grows from a boy to a man. Ultimately, his fervent devotion to educational attainment leads him away from his coastal village to a PhD at Harvard University.

Busjeet gives the tale of upward mobility an ironical twist: as an international student in the United States, he is unable to completely eschew the manual work that he thought his ancestors had left behind. While Silent Winds, Dry Seas will eventually span continents, it is most powerful in its evocation of an island shrouded in the mists of time. We find outdoor kitchens, railway stations, and windows perpetually left open in the summer. Cyclones follow on each other’s heels, and old retirees spend their time attending trials at the District Court. The images are even more powerfully distilled in the poetic interludes that intersperse Busjeet’s prose: Injustice is a schoolboy beaten for eating ice-cream, one lash for every scoop. Multiculturalism is the freedom to choose between a suit and a dhoti. Courage is a vegetarian homemaker who spends her life rearing and then cooking chicken for her husband’s favorite meal.

Through a varied cast of characters—Creole fishermen, Hindu planters, white landowners, Chinese shopkeepers—the novel introduces us to the diversity of the Mauritian population and to the many languages that condition their everyday lives. The novel is peppered with expressions in Creole—so l’esprit tine fatigué, ti blanc, macatia chaud chaud—as well as more colorful swear words that the Mauritian reader might blush to read. Busjeet is careful to note the transformed valences of foreign words adopted into Creole: if the Hindi tamasha continues to denote “song and dance, fun and excitement, as well as commotion and drama,” the French négresse does not refer to race but rather to a woman’s coquettish nature. Bhojpuri is rendered as part of the linguistic code-switching employed by Indo-Mauritians in public situations where they do not wish to be understood by others—we also find a Chinese shopkeeper and his wife employing Hakka to similar effect.

Busjeet’s narrative is deeply attentive to the intertwined ways in which gender, class, and ethnoreligious belonging—termed communauté in Mauritius—condition lived experience. The fact that men are all flavored with “the same sauce” modulates the text like a leitmotif, and humor is an important weapon of critique: “Our ancestors left India a hundred years ago. Who really knows how they did things in the old country? Each family in Mauritius has its own pandit, and every pandit does his own thing.”

Societal divides, Vishnu shows us, are powerful, and yet they are often dismantled by the equally powerful forces of love and solidarity. As a rule, inter-communauté love stories are not tolerated. And yet, when a relative comes to tear apart a mixed couple living together in a conservative Hindu rural area, the villagers are staunchly on the couple’s side. Initially resentful of his rowdy multicultural neighborhood, Vishnu comes to realize how deeply they root for his success: “They consider me one of their own. I’m their horse in the race.” The riots of 1965 and 1968, as well as the tensions that surrounded independence, are juxtaposed against the respect and friendship that Vishnu’s Creole neighbors have for his Hindu father: “You were our teacher—how can we forget that?” Such contradictions are part and parcel of life on the island, and the novel is most powerful when it does not seek to explain them but rather just lets them be, as moments lifted from the flow of time. Ultimately, these vignettes are the most impactful parts of Silent Winds, Dry Seas: glowing encapsulations of a country’s conversation with itself that continue to linger in the reader’s mind long after the last page has been turned.