Being You: A New Science of Consciousness by Anil Seth 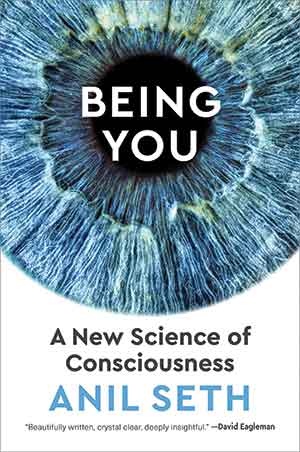 THEORIZING ABOUT consciousness was long left to philosophers. Venturing into the field as a neuroscientist was risking ridicule and, possibly, career suicide, until things started changing in the 1980s and ’90s. Even though the decades since have seen several prototheories of consciousness develop, we still seem far from a full theory, or even an accepted analytical definition of what consciousness means. Many neuroscientists and philosophers thus fall back on a working definition that equates the existence of an agent’s subjective inner experience with what it means for that agent to be conscious.

Anil Seth—a director of the Sackler Centre for Consciousness Science in Sussex, England—too follows this definition in his recent book, Being You. This much-anticipated publication goes on to present the author’s views on central topics connected to consciousness, often developing surprisingly counterintuitive arguments with strong epistemological implications.

In the philosophy of consciousness, people are frequently classified by their stance on the so-called hard problem of consciousness—the question of how and why our brains’ neuronal activity should be accompanied by any subjective experience at all. Interestingly, Seth falls somewhat in the middle of the usual two camps: he does not think that the question posed by the hard problem is inherently meaningless but also does not believe that facing it head-on will lead to any real progress. Rather, he maintains research should focus on what he calls the “real problem” of consciousness: “why a particular pattern of brain activity . . . maps to a particular kind of conscious experience.” This does not directly explain why consciousness exists in the first place (i.e., the hard problem), but the hope is that building more explanatory bridges between neuronal activity and different subjective experiences will diminish, if not dissolve, the need to answer the hard problem at all.

In tackling this so-called real problem, perception takes a pivotal role in Seth’s thinking. He proposes that perception does not happen outside-in, with external physical signals being detected and processed to constitute our view of the world, but rather inside-out. According to Seth, our brains constantly make predictions about the causes of our sensory signals. Perception then “happens through a continual process of prediction error minimization.” What sounds technical should not conceal the magnitude of this claim: Seth proposes that we do not see, hear, or smell the world as it is, but rather that we live in what he calls a “controlled hallucination.” We only have an internal model (a “hallucination”) of the world and our bodies. This model is continuously updated and corrected (“controlled”) through new incoming signals. What we normally refer to as a “hallucination” is but a failure of the control step of this process.

But Seth extends the role of prediction far beyond the perception of our environment and bodies. He sees our emotions as being “control-oriented perceptions which regulate [our] body’s” temperature, blood sugar, and other “essential variables.” Even the notion of our self is a prediction of our mind, one which, just as any prediction, can disintegrate to various degrees—most completely under the influence of large doses of psychedelics, or due to damage or disease.

Lastly, Seth discusses the possibility of consciousness emerging in artificial intelligence. He argues that our brains’ principal function—to control our bodies’ essential variables—firmly connects our consciousness with our biology. However, the pivotal role that our biology plays in the structure of our minds does not rule out the possibility of artificial consciousness in principle. Seth thus suggests that it might require silicon-based minds to mimic certain aspects of our evolved embodied minds to become conscious.

Despite much progress, the scientific field of consciousness is still in its infancy. We might hold a growing number of individual puzzle pieces and ideas but are likely still far from finding a single theoretical frame that can put them all together. What is exciting to the researcher might be frustrating to the novice. Each introductory text comes with its own philosophy, defending a certain school of thought. Likewise, depending on the critic’s own ideas relative to the author’s, we find a varying degree of affinity expressed for any given book on the topic.

Being You cannot escape this reality but manages to be both more careful yet bolder than others. Some of Seth’s colleagues have proposed concrete brain regions for where consciousness happens—e.g., a defined brain network in Stanislas Dehaene’s version of global workspace theory or, more recently, certain brainstem structures in Mark Solms’s theory. Being You does no such thing. Instead, it focuses on the abstract mechanisms of perception and how these impact different qualities of our consciousness. Yet Seth’s pivotal claim that we are predicting machines, which dream up both reality and our self in it, is an idea whose implications are hard to match.

Being You is a fantastic exposition to a family of revolutionary ideas gaining increasing support both from neuroscience and artificial-intelligence research. It is a much-rewarding read, both for people familiar with the central questions of consciousness and the interested newcomer. It is too early for anyone to write the definitive book on the subject, but with Being You, Seth has gotten closer to it than many before him.