Celia, Misoka, I by Xue Yiwei 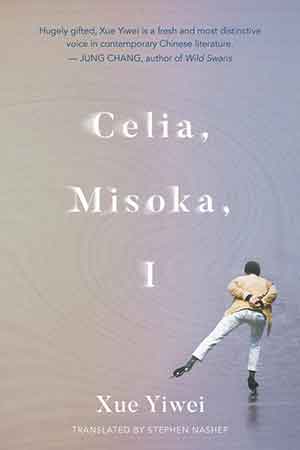 THE AWARD-WINNING Chinese Canadian author Xue Yiwei’s novel Celia, Misoka, I tells a story of immigrants in this great, globalized age. In a most unusual winter in Montreal, the death of his wife and the moving out of his daughter throws the first-person narrator, a middle-aged Chinese man who has been living in Montreal for fifteen years, into an unprecedented spiritual crisis: “I was aware that something had changed between the world and me. I was no longer a husband, no longer even a father, no longer the owner of a business, maybe no longer even really a man.” Engulfed by despair and disillusionment, the narrator’s world is gray, full of sadness, loneliness, and a kind of “powerful coldness.”

Fortunately, on Montreal’s Mount Royal, two mysterious women enter his collapsing world at the same time: one is Celia, “the healthy sufferer”; the other is Misoka, who is sitting in a wheelchair and busy writing by the frozen Beaver Lake. “Just like that, they entered my life, Celia and Misoka, two mysterious women with completely different energies, appearing before me like some irresolvable contradiction.” The contradiction in these two peculiar beings arouses in the narrator an intense curiosity about life itself. Isn’t it human nature to be curious about others? This intense curiosity not only gives the narrator a sense of longing and anxiety for the future but also a sense of fullness he has never felt before. Quite unexpectedly, it also gives him a new understanding of the past.

The novel is about the wonders of life that befall the lonely strangers whose lives are thrown into the infinite void. “Three insignificant grains of sand” were brought to Mount Royal by the winds of this globalized age. In this moment of wonder, “it was as though the rose of time had come into bloom,” and the three trajectories of fate constantly crisscross and mirror one another like three movements of a sonata. The value and meaning of being as well as the outlook of the bigger picture of life also appear in this sonata of fate. In Xue Yiwei’s literary works, history and reality are always looking for an opportunity in the character’s inner world to collide and produce some far-reaching and profound sparks of humanity. The multiple foci of his narrative serve to connect the obscure past of the characters: once the abyss of memory and imagination is open, one can see the heart-stirring power of the characters’ inner storm.

Celia, Misoka, I shows the plight of modern men and women in the era of globalization through the suspenseful life stories of the three characters. Xue skillfully employs a narrative structure similar to that of a detective novel, in which the characters take turns to reveal the darkest memories of the enigmatic women. The greatest suspense of the story is why the women had become what they were. The author uses the rhythm and emotional flow of the story to draw the readers into the mood of melancholy and disillusionment.

As the greatest wonder in frigid Montreal, Celia and Misoka eventually save the narrator from despair. However, their experiences seem to overlap with the narrator’s, so that when we examine them retrospectively, we realize that they appear so suddenly and disappear so quickly, as if they never existed. Perhaps they are just a supplement to the relationship between the narrator and his dead wife, or a fantasy of the bigger picture of life out of the narrator’s desperate state of mind. In this sense, both Celia and Misoka may be in fact different personas of the narrator.

At the end of the novel, the narrator reveals his true thoughts about humanity through the words of Hermit Wang: “Once an immigrant, always an immigrant. For someone who has emigrated, returning home is simply a second emigration. You can never go home! You will forever and everywhere be a stranger!” This is true for Misoka, whose suffering came from the emotional trauma caused by immigration; this is true for Celia, whose experience as an immigrant turns her into a prisoner of the darkest memories; it is also true for the narrator, who views immigration as a cruel choice. Xue seems to suggest that in this globalized age, human relationships are complex and fragile, and the world we live in is becoming increasingly spurious. We are all immigrants in this era, as the narrator notes: “It occurred to me that my loneliness arose from my estrangement from what was true, and my longing was really a longing for the truth, that most sacred of homes.”

Xue’s novel expresses more complex emotions in addition to profound melancholy and entrenched loneliness. He addresses issues of immigration and displacement, philosophical thoughts on love and marriage, and metaphysical inquiries about chance and necessity. These reflections make the story an allegory of the author’s obscure and unspeakable thoughts. On one hand, they show Xue’s philosophical pursuit and metaphysical thinking; on the other hand, they load the novel with deep and complex meanings that cannot be easily articulated.

Among all these themes, the meaning of “reconciliation” is most intriguing. In the novel, everyone is lonely, and almost all children have a strained relationship with their fathers. However, time always dilutes everything, and the final reconciliation inevitably comes. In Xue’s words, reconciliation is a matter of chance or design. At the end of the novel, the reconciliation comes suddenly and unexpectedly: the warm head nurse finally gives the narrator a faint sense of home. This surprise gift of life brings the narrator a much-needed relief after the emotional roller coaster of the unusual winter. This reversal of the story is intended to bring the narrative to a safe landing, but the overall mood of the novel stays. The world is still crisis-ridden, but this brief moment of peace in the end of the novel is nonetheless heartwarming. (Editorial note: Review translated by Ping Zhu, University of Oklahoma)