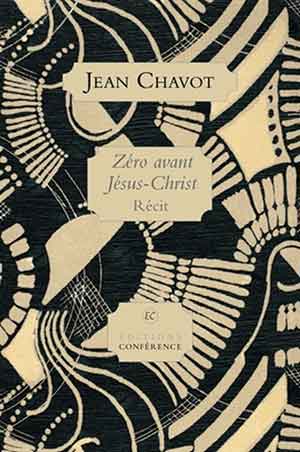 ZÉRO AVANT JÉSUS-CHRIST is the second published book by French author Jean Chavot, following a collection of flash prose, Soixante minutes. Witty and delicate, Soixante consists of small, distinct snapshots of daily life sketched with levity and concision, while the fifty-five chapters of Zéro unfurl like a continuous, irresistible wave. Like a wave, the narrative spirals, coming back to recurrent motifs, though the mounting tide inevitably pushes it toward its breaking point, ashore or, instead, far asea.

A récit, neither novel nor memoir, Zéro belongs to the liminal zone of autofiction, a lively trend in French literature since the 1970s. It draws the life parabola of Nicholas—Chavot’s barely disguised alter ego—from childhood to an undefined midlife point where some questions seem to have been finally answered, if just to reveal wider horizons, more questions. That is enough time for the author to explore a rich gamut of historical, geographical, and societal landscapes: May 1968, the drug scene of the seventies, the entertainment world and the music business of the eighties, the spread of AIDS in the early nineties, Paris, Rome, and a number of provinces, both Italian and French, with their unique cultures and flavors.

But the impetus behind the narrative isn’t descriptive. On the contrary, the kaleidoscope of sceneries and portraits have the slight ambiguity of projections despite their neat and elegant rendering. People and events of Nicholas’s life blend with his dreams and visions—either those chemically engendered or those born from his spleen and angst—and they all self-deny, self-erase as soon as the page is turned, swept away by the all-consuming quest for a Holy Grail that, once found, might quench the ontological thirst haunting the protagonist.

What is Nicholas looking for? The book postulates his query as a need for transcendence on behalf of a child raised in a communist, strictly atheist environment. The religious dictate, usually imposed on children, who then spend their adult years trying to lift its burden, here becomes the mermaid, the unicorn, the hidden treasure denied to the acute, sensitive boy-who-needs-more-than-facts. Paradoxically, the secular child, the youth unbound by moralistic taboos, the man free to apply critical thinking, relentlessly seeks for a compass, a map, a sacred scripture.

But all of Nicholas’s attempts to marry religion end in divorce, just as his relationships do. And his quest for god is a sheer, naked veil revealing his poignant grief for the father, an elusive figure, beloved and untimely lost. As the mother painstakingly attempts to efface his legacy, the paternal shadow haunts the protagonist, asking for justice, for burial, for closure. Dealing in-depth with these feelings allows Nicholas to first redeem his filial love, then to parent his son, hence realigning a manner of male lineage, a vertical axis, the stipe of the Christian cross that so fascinates him.

Anchored at last into earth, he is ready to explore longed-for otherness, whatever it might be, still blurred like the coast of Africa that looms far, yet visible, at the end of the book.