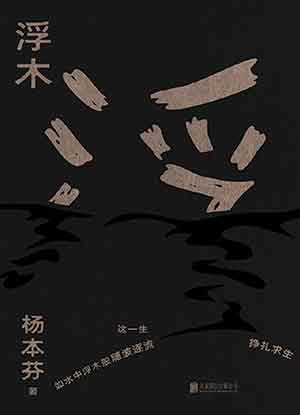 YANG BENFEN PUBLISHED her first autographical novel, Qiu Yuan (which translates as “Autumn Garden”), in 2020, when she was eighty years old. She finished the whole story in the kitchen, crammed with the sink, stove, cooking counter, and refrigerator. There was no place for a desk, so she penned her deep affection for her late mother while sitting on a low stool. The first novel was a huge success, ranked as one of the most popular novels in China that year. The sequel, Fu Mu (Driftwood), appeared the following year.

Yang Benfen doesn’t use sophisticated writing tactics to win readers. She writes in rather plain and simple words, packed with intriguing details in southern Chinese dialects. Fu Mu is a supplement to her first novel. Bits and pieces that didn’t fit into the tight framework of a novel are scattered around here in a loose way. It’s as touching as the first novel and closer to her real life, the life of a common old lady who shares the same memory with millions of Chinese mothers and grandmothers.

“My whole life is like a driftwood in the torrent, struggling to survive.” She writes in the foreword: “Most people under my pen are gone, like foam vanishing with the waves, or lightning flying into the sky. The stories I write down here are illusions—just a memory.” Fu Mu is like an illusion, broken and fragmented.

The entire book consists of three chapters. The first chapter, “Home,” reads like a diary of a first-person perspective with exact dates and years documenting people’s lives and deaths. “In early April of 2018, I had a minimal-invasive surgery.” “On April 29, I got the grievous news of my brother’s death from my nephew.” Memories of her mother and siblings take readers back to Autumn Garden.

The second chapter, “Village,” is more like a collection of fictions. The writer’s neighbors once more become characters in her story, but this time they are protagonists. The time line becomes vague, and many paragraphs start with “One day . . .” Sometimes the writer tells the story with the help of an omniscient narrator. Fights between mother and daughter, father and son, mother-in-law and daughter-in-law, and conflicts among family members that never existed in Yang’s own family are the theme of this chapter. The dark side of family life is only allowed in other people’s stories, only in the fiction, which reveals the unspeakable pressure Yang experiences in her writing.

In the third chapter, “I,” the writer extends her memoir into the next generation. In this chapter, she is the mother, the grandmother, keeping notes on the life of her children and grandchildren. The fragmented writing and the reestablished time line reveal the change of her writing conditions. Her writing stool moves from one kitchen to another. But unchanged is her urge to write, and the urge undoubtedly will continue dominating her twilight years and bring more memories, flashing with crystal light and reflecting the whole hidden universe before their evaporation.