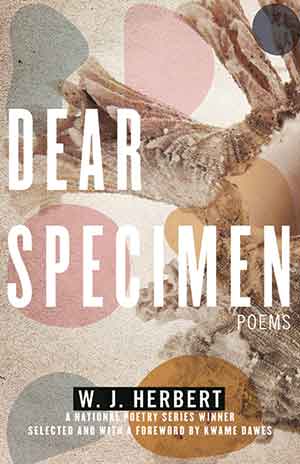 THE POEMS OF Dear Specimen combine human and ecological grief into an elegy for all earthly life. W. J. Herbert’s poems cohere into a narrative because they are spoken by a single persona, and over the course of the book we learn that the narrator is the caretaker of a dying father, and in turn a dying mother who, observing fossils and taxidermy specimens, is reminded not only of the way of all flesh but also of our species’ particular culpability at this moment.

The vital context for Dear Specimen is the earth’s ongoing sixth mass extinction, the Holocene extinction. In her poem “Celestial Mechanics,” Herbert updates Blake’s question to the Tyger: her narrator wonders whether God’s hand is present in a meteorite or the terror-inspiring mosasaurus; she asks whether “after . . . sculpting T. rex / & its victims, didn’t He hesitate // to forge & unleash us?” “If Oil Rigs Raise You Like Lazarus from the Shale of the Permian Basin” imagines the speaker traveling back in time to those primitive seas, meeting the creatures there: “I would lay my body // down beside you, / . . . / & I would apologize, / confess: If we raise you, / no one can save us.” Dear Specimen’s ecologically themed poems run the gamut from lament to rage. None of the poems in Dear Specimen shy away from human culpability in the current ecocide.

One of this collection’s arguments is that humanity, as it behaves at present, does not deserve saving. Before us lies a climate Rubicon; our feet are already in the stream, and yet we stride onward into the current, in denial of our senses. In one poem Herbert describes how we pickle or pose corpses for our pleasure. In another, the narrator includes herself in the crimes, describing how she fails to “connect the bracelet / I buy at Walmart to a gold / mine’s cyanide heap.” In “Tipping Point,” where she writes “Earth’s angry, now, no longer on her knees,” Herbert joins a growing chorus of poets who no longer believe that everything is going to turn out all right. Under the weight of ecological grief, hope and reverence are transforming into a poetics of disaster.

While there is no shortage of human crimes against the biosphere (and probably no shortage of poems decrying these sins), poetry that only sings doom probably has little effect. If humanity has not already doomed itself and the biosphere that nourished us, ecological poetry has a place in correcting our ways and healing the world. Dear Specimen attempts this by engaging human empathy. If our capacity to empathize with the nonhuman world is stunted, we maintain a strong regard for griefs we can imagine ourselves suffering. The other vital context of Dear Specimen is the narrator’s own mortality.

Several poems describe the narrator’s care for her dying father, such as “Mounting the Dove Box” and “Dark Season,” which ends questioning “are these my griefs / trapped between vine and slat? – // the dog I didn’t care for / well enough and so /she died, orphaned // cousin I could have loved, / the better death / I wanted for my father.” The line breaks in “Dark Season” muddle these regrets together, obscuring the human and nonhuman. Thus, Herbert’s narrator is fixed in the context of life, the relentless progression of life; within pages, readers learn that she too is destined for a prolonged death, which her own daughter must deal with in turn. The title of the book’s first poem, “A Homo Sapiens on the Brink of Extinction Speaks to the Fossil Mosasaurus,” is both abstract and particular. This individual H. sapiens is literally on the brink of her own extinction, and this lends great power to the poems addressed to animals living or dead. Vivid, arresting images such as the comparisons between an X-ray and a fossil imprint are characteristic of Herbert’s skill as a poet.

In “The Open Boat,” Stephen Crane’s narrator opines, “Perhaps an individual must consider his own death to be the final phenomenon of nature.” Dear Specimen does not share in this solipsism: the last poems of the collection, though still from the narrator’s perspective, come from after her death. The narrator’s daughter is imagined interrogating exhibits of natural history, pleading with them to tell her, Sarah, whatever they had said to her mother. We do not get the answer. Instead, the collection ends with a poem about the future, after the collapse of the environment, after the remains of humanity have crowded into the Arctic, “swarming onto sacred land / with its legend / of a magic caribou boy who / . . . / no longer wanted to be human.” Dear Specimen manages to make the abstract problems of ecological collapse feel very personal. If we want to continue being human, we must heed voices such as Herbert’s.