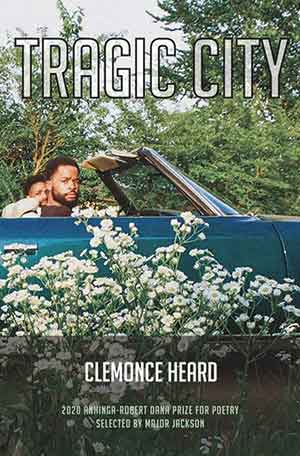 CLEMONCE HEARD PRESENTS a timely yet timeless collection in Tragic City, consisting of poems that artfully push against a singular interpretation of America’s historical legacies. The general inspiration for the poetry is clear: a race massacre in 1921 Tulsa, Oklahoma, its contexts, and the complicated legacy of racist municipal ordinances and legislative policies, fear, resilience, urban renewal, gentrification, and eventual atonement born from that event. Yet, while guided by these realities, Heard’s work is not constricted by them. Tragic City is filled with keen observations on relationships, human experience, and that which binds people together, whether by chance or force. There are sprinkles of contemporary pop-culture references, striking odes to communities outside Oklahoma (e.g., Memphis and New Orleans), and an intimate self-reflection on how we make sense of it all, once we truly realize what “it” is.

The collection is filled with power and heft, beginning with the breathtaking first poem, “Commentary.” The author turns a relatively commonplace item of clothing (the “distressed tee”) into a powerful symbol of pain, fear, anxiety, and, well, distress, when worn on the Black male body. Heard melds fashion-show commentary with the description of the daily movements of the subject whose attempts to remain alive remain perilous in an American police state. Heard writes, “Its ragged / look has made it the most sought after garment / of last summer & this fall, though it’s a rather old addition / to the harassed trend of blackness . . .” Within this poem and several others, the reader encounters an acute rendering of hunted Black men and manhood that runs like an electric current through the collection.

In other parts of the text, Heard captures the nuances of the Greenwood District. Streets in North Tulsa come alive through the descriptions of local establishments, the people who frequent them, and the living history within the crevices of the pavement. Tragic City works to reanimate the voices of those who populated the community in the century before, and it listens to those who are working through an understanding of the present. Two of the found poems in the collection, “Headed North on the Midland Valley Railroad Tracks” and “CINDER/ELLA,” present the recollections of Black youth. The first, from the perspective of a child fleeing the massacre, plays with repetition and alliteration in the first word of most lines (“Shots,” “Shots,” “Shocked,” “Shock,” “Shook”). The other, focused on a young woman preparing for the Booker T. Washington High School prom on the same night of the massacre, previews a tragic ending to the night. Heard places these poems in conversation with the greater Tulsa area busily attracting twenty-first-century millennials nationwide to its arts scene. Examples include “My Fellow Gentrifiers,” “Jazz Hall of Fame,” and “On Your Final Night in T-Town.”

Still, the contrast between old/new or Black/white would be too simplistic of a reading of the collection. Each piece is a reflection on what it means to be fully present and aware of the nation’s contradictions. And each piece is also a lesson on how to engage with those same contradictions in a contemplative and purposeful manner. Tragic City is the product of a writer with the ability to piece together the shards of American life and create a mosaic of beauty and truth through verse, marking a gospel of Greenwood. (Editorial note: Heard’s poem “Against the Horizon” appeared in “Redreaming Dreamland,” the spring 2021 issue of WLT dedicated to the centennial of the Tulsa Race Massacre.)