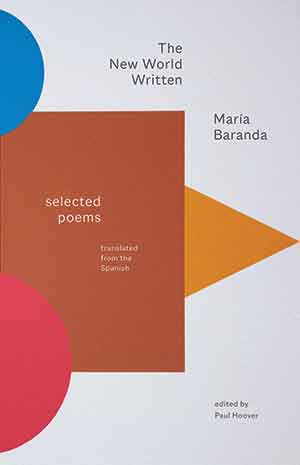 WHEN ASKED ABOUT her primary influences, María Baranda pointed to Lebanese poet Andrée Chedid for her “luminosity” and the textures of the work. Her reply may have surprised the interviewer, Fernando Valverde, who is the leader of a group of Spanish “poets of uncertainty.” On the other hand, it might have seemed natural because Baranda’s work creates constellations of concrete ideas and objects that shine and illuminate the dark, destructive churn of broken consciousness and language in the throes of coming into existence.

Such luminosity is clearly evident in a valuable collection edited by Paul Hoover and translated from Spanish by several translators. The New World Written covers twelve different collections, ranging from her early published collection, The Garden of the Enchantments (1989), and extending to Nightmare Running on a Meadow of Absolute Light (2017).

The earliest work, from The Garden of Enchantments, turns to the sea from which the poem emerges, then returns again and again. The surrealist images fuse body and concept, eliminating the false notion of separation between beings and creatures: “I waited / humming a song with closed eyes, / the moment to lay out, for you, a prayer mat / woven with the skin of my desires.” Such interweavings continue in Impossible Dwellings (1997), where the poem “In the Pistils” captures the earthy metaphors attending the collapse of physical structures, giving rise to a renewed rage for order as the “tongue is an avalanche where / life tumbles rumbling,” ultimately “driven to naming.”

Nightmare Running on a Meadow of Absolute Light (2017) blends minimalist short verses with prose poem blocks as well as italicized sections of a chorus. The chorus appears as a voice emanating from a place where reality is shattered to make available the raw material of meaning and life. The countering en face sections contain the poet’s voice confronting a world of infinity. The poet is ecstatic but not invulnerable, as she expresses the fear, the true risk of falling. In A Hive of Sea Birds (2015), “The Beach” incorporates Zeus, the sea nymph Thetis, and other ancient Greek personae, appearing with creatures from nature (bats, roaches, bloated fish, vultures) and events (shipwrecks, tides), creating imagistic bridges in the reader’s mind to provide depth and texture to the constant loss and reconstructions of memory and identity.

The winner of Mexico’s highest awards for poetry, Baranda develops a poetics that disassembles the metaphors and narrative that are often the primary vehicles for generating multiplicities of meaning from individual words or phrases. Instead, metaphors are ruptured in progress, and narratives are only hinted at or left dangling. The result is a metaphysical and philosophical luminosity of language that immerses the reader in cycles of life, death, and a quest for understanding what it means to be able to perceive.