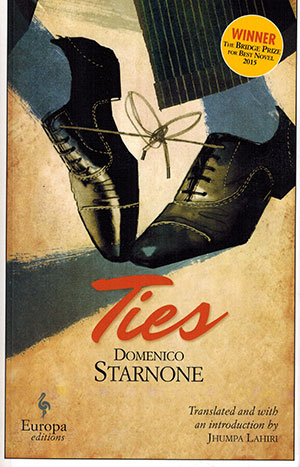 Domenico Starnone is the author of more than a dozen literary works of fiction in his native Italy, and thanks to Europa Editions in the United States, we are finally getting his works in English translation. In 2009 Europa published First Execution, translated by Antony Shugaar, and now we have Ties, in a remarkable translation by the author Jhumpa Lahiri. Both novels are tightly executed examinations of human relationships in the modern world, a world where the wires that connect us to a semblance of security are becoming increasingly frayed.

Ties is a novel about family. It’s about the relationships between husband and wife, their children, and their pets. It’s also about attachments, both physical and psychological. But perhaps most subtly, Ties is about the relationships between the translator and the text and the author and his readers. Ties is divided into three parts, each exploring the ramifications of the husband’s infidelity and his abandonment of his family. Starnone has stated that each part can be read as an autonomous whole, as a novella, with certain links that connects the parts.

Part 1 is told from the wife, Vanda’s, point of view in the form of letters to her husband, Aldo. The novel’s striking beginning sets the scene for what comes over the next 150 pages. “In case it’s slipped your mind, Dear Sir, let me remind you: I am your wife.” The tone in the first part is one of bitterness and betrayal. It shows an abandoned wife slowly unraveling as she struggles to carry the burden of her children, the upkeep of the house, bills, and life in general. Despite this, the wife demonstrates a steely resolve whose condemnations of her husband, however justified, never feel quite right to the reader.

Part 2 is told from Aldo’s point of view. It is the longest of the three parts and reads more like a dispassionate report of events that lead up to and beyond the abandonment of his family. The second part begins with Aldo and Vanda, now elderly, about to go on vacation. When they return they find that their home has been broken into and wrecked. The metaphor of the wrecked home would be too easy here except that Starnone sets the scene decades after Aldo’s infidelity and abandonment. What follows is a remarkable study in manliness and the role of husband and father. Moreover, it takes us deep into the dark places left in the wake of that infidelity and abandonment.

Part 3 is told from Aldo and Vanda’s children’s point of view, now grown and living away from their childhood home. This is perhaps the most tragic part of all. It shows us that parents have the capacity to screw up their children in even the smallest ways.

Ties is an extraordinary novel. Most striking is that Ties reveals that beneath our manufactured roles of husbands and wives, fathers and mothers, and of children, we are all human, deeply flawed and often with irrepressible desires and drives.