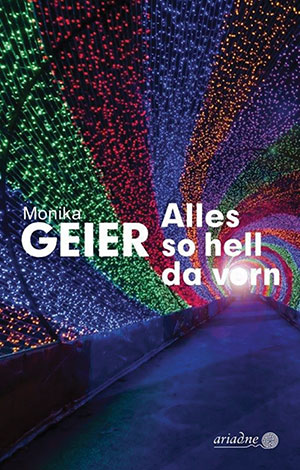 Alles so hell da vorn (It’s all so bright over there) is Monika Geier’s seventh outing for the likable and slightly chaotic Detective Superintendent Bettina Boll of the Ludwigshafen police force. Supposedly working part-time to look after her sister’s children, she is on call the night her colleague Ackermann is shot dead in a Frankfurt brothel. Although dressed in his police uniform, it becomes clear that he was not there on official business. The underage prostitute who killed him goes on the run and guns down the principal of a village primary school. Meanwhile at work, questions are being asked: Why was Ackermann in uniform, and did others in the force know of this illegal brothel? Evidence deleted from the computer system points to Boll’s involvement in the cover-up. Forced to prove her innocence and driven by the desire to find those responsible, Boll enlists the help of a timid forensics officer to distinguish victim from perpetrator.

This intricately woven Krimi sows seeds of suspicion just ripe enough for us to glimpse behind the façade but at the same time subtle enough to keep us speculating right until the reveal. Told alternatively in the first person by the prostitute and in the third person from the perspective of Boll, who fortuitously is involved in all major events, the story quickly moves through the intense days and nights of the investigation. Readers will warm to Bettina Boll, who throughout is just trying to do the right thing, despite the odd unprofessional mishap, overt animosity from colleagues, and a fatal shooting. Several crime scenes under the jurisdiction of different police forces mean Boll interacts with many other officials, and readers need to pay attention to know who’s who. The epilogues tie up the loose ends nicely, although a total of seven of them feels slightly like overkill.

Alles so hell da vorn is an engrossing police procedural following the investigation of an atypical fictional police officer. It earned a well-deserved second place in the 2018 Deutsche Krimi Prize, and curiosity about knowing what happens next will keep readers up well into the early hours.