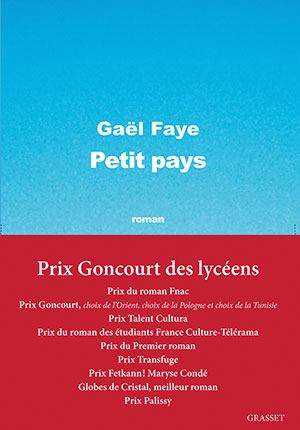 The translations of Petit pays into thirty languages and its five French literary prizes attest to the universal appeal of this first novel by Gaël Faye, a Franco-Rwandese rapper and former London trader. Bearing the eponymous title of one of Faye’s autobiographical rap songs, the novel is set in Bujumbura, the capital of the child-narrator’s paradise, Burundi, the “small country” abutting Rwanda, Zaïre (today’s DRC), and Lake Tanganyika. Born, as Faye sings, of a “croissant au beurre” and a “pili-pili,” the author’s and narrator’s lives overlap. Each is the son of a French expatriate father and a Rwandese refugee mother, born and raised in Burundi during the years leading up to the 1994 genocide in Rwanda and the concurrent tragedy that unfolds in Burundi, during the novel’s diegesis from 1992 to 1995, and necessitates their expatriation to France.

Gabriel’s first-person narrative describes his carefree days spent with his sister; sharing mischief and stories with his band of five friends hiding out in a broken-down Volkswagen bus; and his later visits to their Greek neighbor, whose novels let him escape the limits of the cul-de-sac where they live, when his familiar world begins to close in. In juxtaposition, his interior monologue seeks to pinpoint when divisive identity politics crept up on them, where the violence came from, and how their time of innocence was ruptured.

The prologue’s short dialogue between father and son, which sets the novel’s tone, identifies the key geopolitical issues with the acuity of a ten-year-old’s perception of the times’ changing winds. To Gabriel’s question: Why are the Tutsis and Hutus fighting?, his father responds, Because they don’t have the same nose. Then, ironizing on the persistence of children, the narrator recalls a classmate categorizing Cyrano de Bergerac as Tutsi, before concluding: “Le fond de l’air avait changé. Peu importe le nez qu’on avait, on pouvait le sentir” (Something in the air had changed. And you could smell it, no matter what kind of nose you had). Petit pays thus moves from the personal to national and international political tensions, with Gabriel’s parents’ breakup presaging the civil war that would tear Burundi apart and that continues to this day, with its summary trials of human-rights activists, hate propaganda, and ideological signposts that characterize genocides.

Written in 2015, the year of the terrorist attacks on Charlie Hebdo and of the concomitant question of hospitality for migrants and refugees, the novel opens with Gabriel remembering his eleventh birthday, as he turns thirty-three in Paris, alone in a bar, where a TV flashes images of refugees fleeing war just as he had twenty years before, and deciding to return to Bujumbura. With its luminous ode to a childhood bathing in Burundi’s beauty; the realism of snatched conversations and radio broadcasts about unfolding political events; and the acumen of the contemporary orality of its raplike punch lines, Petit pays circumscribes the fragility of everyone’s cul-de-sac, in a personal hymn to reading and writing as humanity’s safe haven and safeguard. (Editorial note: An English translation by Sarah Ardizzone, Small Country, was published by Hogarth in 2018.)