Cuba on the Verge: 12 Writers on Continuity and Change in Havana and across the Country 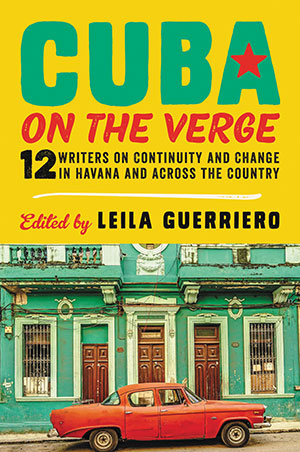 In his foundational essay “Los factores humanos de la cubanidad” (The human factors of Cubanness), Cuban anthropologist Fernando Ortiz wrote what has become one of the most succinct and oft-quoted definitions of Cuban culture: “Cuba,” Ortiz wrote, “is an ajiaco,” that is, a hearty stew (think goulash) whose principal ingredients, among others, consist of pork, beef, sometimes chicken, plantains, yuca, malanga (taro), sweet potato, corn, garlic, onion, tomato, and ají, the sweet perennial pepper from which this most Cuban of dishes derives its name. In other words, a salmagundi of the meats, tubers, and vegetables that flavor the Cuban kitchen.

Ortiz’s culinary metaphor was not incidental. On the contrary, it was intended to distinguish Cuba from America’s “melting pot,” in which many different cultures blend together to create homogeneity out of apparent heterogeneity. Cuban culture, in other words, was not a whole made of seemingly disparate parts but rather the parts themselves, each one distinct while also unique in substance and flavor.

I mention this otherwise incidental detail by way of introduction to my review of Cuba on the Verge: 12 Writers on Continuity and Change in Havana and across the Country, a ragbag of twelve essays that form an almost perfect ajiaco of twenty-first-century Cuba.

This is, however, as much a review of Cuba on the Verge as its Spanish analogue, Cuba en la Encrucijada (Cuba at a crossroads). I say analogue rather than translation because each book contains essays written in one language and translated from the other, although the majority seem to have been written in Spanish and translated into English. That said, curiously, the book appeared in its English edition (December 5, 2017) before appearing in Spanish (March 6, 2018).

The (slightly discrepant) titles are not the only thing that leaves this reader scratching his head. For some reason, although I’m sure one exists, the essays do not appear in the same order in the two versions, which seems to reinforce my claim that neither version is a translation of the other.

The essayists that make up this Cuban stew include names that will be familiar to readers of World Literature Today as well as those of Cuban literature in translation. Perhaps less familiar, but equally welcome, is Vladimir Cruz, a popular Cuban actor best known to American audiences for his portrayal of the young (heterosexual) revolutionary in the 1995 film Strawberry and Chocolate. Other essayists include a concoction of journalists, academics, and writers, mostly Cuban, or Cuban American, but also Chilean, Spanish, Colombian, and American.

Of the twelve essays, four stand out for their unique flavor: Cruz’s memoiristic “The Personal Movie: Tribulations of ‘The Good Demons’”; Iván de la Nuez’s “Cuban Capital: Transition (to What?) in Seven Parts,” a critique on Cuba’s incipient capitalism; “Miami: The Coconut Trail,” which offers a fresh take on the Cuban diaspora as seen by the young Cuban cronista, Carlos Manuel Álvarez, who appears in the latest iteration of the prestigious Bogotá-39 list; and Leonardo Padura’s “Dreaming in Cuban: A Chronicle in Nine Innings,” a paean to Cuba’s love affair with baseball. Of the twelve, the one that seems most ill placed in this collection is Rubén Gallo’s “Sodom’s Bookstore.” While an interesting bookend to Abraham Jiménez Enoa’s “The Hunter: Ernesto the Jinetero” (a male hustler), Gallo’s broadside, which trades in innuendo and rumor, borders on homophobic.

In the interest of full disclosure, I will mention here that I know Eliezer, the subject of Gallo’s essay, and I visit his bookstore, which was the featured Outpost in the September 2013 issue of WLT, every time I travel to Cuba; like numerous academics and literary tourists, I have purchased dozens of books from him. To say that Eliezer is a character would not be an exaggeration, but only in the most benign and affable way. In fact, I have met Dr. Gallo, coincidentally, at “Sodom’s bookstore.” What’s more, I am familiar with his (generally respected) scholarly work, which makes his gratuitously sordid depiction all the more bizarre.

Although the translations are, on the whole, competent, some failed to capture the nuances of Cuban Spanish, while others displayed a fundamental misreading of the Spanish, which, frankly, should have posed no problem.

Finally, as a frequent traveler to Havana—and student of Cuban culture—I was happy to read this collection of essays. Given the growing interest in Cuba, and Havana in particular, I recommend it to anyone who has traveled there or is interested in doing so.