The Shepherd’s Hut by Tim Winton 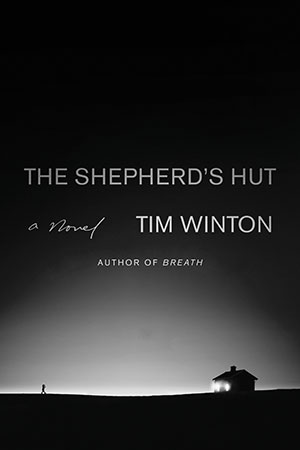 Set in western Australia, Tim Winton’s newest novel features a teenager who wants to escape an abusive home but can’t do so until his parents pass. Anger, a determination to get to a beloved cousin in another town, and a thoughtlessness in leaving that could make him a fugitive suspected of murder all mix to create an unstable character in Jaxie Clackton.

This is familiar territory for Winton, who seems to specialize in damaged adults or children on their way to becoming damaged. In many of his short stories, one encounters a naturalistic situation: a victim of abuse in an environment that offers few options, the mind shackled to place. At the ends of such stories, the characters are usually free, still alive, carrying the readers’ hopes for a better future. That’s certainly true of The Shepherd’s Hut.

The narrator holds the reader inside his telling, day by day as he walks away, cultivating a sense of being trapped. Only after he meets Fintan McGillis, an old man living as a hermit in a former shepherd’s hut, are there scenes with dialogue. In a sense, Jaxie seeks stability or peace by learning to understand Fintan. Though he wants to move on, he is held by his curiosity and a grudging affection.

Winton shines when describing the landscape, the dry salt lake, jutting rocks, scrub bush, the itching feel of dirt, wild goats, mirages at the end of the day; he likewise captures the flavor of a teen’s language and confusions. Fintan, necessarily, is described from the outside, but his thoughts about penance, Jackie’s future, and God add a luminescence to the natural environment in which they live.

Jaxie’s hard-won stability is openly and aggressively displayed in the opening chapter. What it took to get there, whether a change after a moral abandonment or just a return to what he is, seems more problematic. Just because readers have been listening to a kid tell his story for over two hundred pages doesn’t mean anyone really knows him or what he’s going to do, only that he has survived to tell his tale.