Hello. Your Promise Has Been Extracted by Ahren Warner 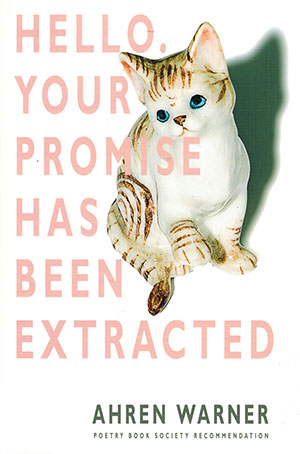 Ahren Warner’s third book is, from the start, clearly about the weight of history. “[E]ach city east of Bremen bears the pockmarks of a bygone pogrom gouged into its brickwork,” he tells us, beginning his travelogue of fragmentary lyric and architectural photography. The best thing about this book is that it feels peripatetic, like the travel diaries of Basho. This is, however, a grim journey.

Money makes an inverse difference
to distance, when I lift her back
to me now: nothing there but that pale
curly head working,
a machine up and down, an ochre
autumn merging into twilight.

Much of the book reads like the lesser bits of Rilke translated by someone who speaks no German. Occasionally the verse descends into complete nonsense: “Soup. Soup. Soup. Rage. / You will have nothing in your pot / but a broomstick and a pay cut[.]” Sometimes there is an admirable attempt at irony, but it usually descends into mere bathos: “Please, do not imagine a lame pony scuttling, wheeling against the ground, slated for retirement by Mr. High-Velocity Rifle.”

The poet also takes a distinctly undergraduate approach to allusion, dropping in names from philosophy with no real import for the poem or embroidering his own lines with some of the most highlighted bits of the Norton Anthology. He really wants everyone to know he has read Hegel, and Adorno, and Yeats. He even includes an index to make sure we don’t miss how clever he has been.

The admirable attempt to address history’s increasing freight of violence is belied by the poet’s tendency to reduce that violence to mere shock material: “a man / who watched his mother / being raped / placing his gun / on a child’s lips / and pulling the trigger.” This is an important subject for poems, but the sensationalism of the line-breaks reveals the poet’s immature motives for evoking it. This is not how Celan does it.