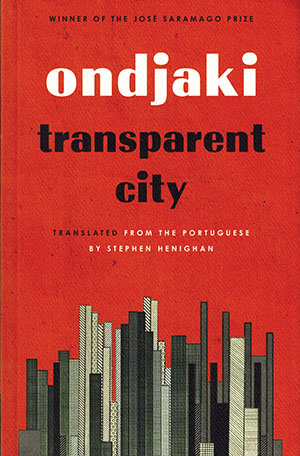 Despite Transparent City’s focus on a community slipping down a precipice and toward urban demise, Ondjaki’s prose pulses with life. In the hours before a cataclysmic fire and a historic eclipse, a politically estranged father scours the underbelly of Luanda, Angola, for his mortally wounded son. However, to cite this endeavor as the novel’s primary thread could prove problematic as Ondjaki bounds between perspectives with the fluidity of consciousness.

The trajectory of Ondjaki’s authorial eye could easily run the risk of minimizing the weight of figures, yet his emphasis on mundane interactions and their conversational subtleties ensures the novel’s gravity. Like the literary form of Wim Wenders’s film Wings of Desire, Ondjaki looks no further than these brief encounters to uncover life’s reverence. However, the novelist also instills a sense of fantasy through one of his protagonists, Odonato, a man whose body grows increasingly transparent as the comforts of an old life likewise disappear.

Transparent City can still feel a bit eclectic at times, but more so due to the text’s insistence on reflecting a whole city’s demeanor. Some moments, such as the numerous exchanges between a seashell seller and a blinded curmudgeon, shine with an unexpected clarity. Ondjaki does stretch himself thin in some sequences, as the author’s critique of journalism through a former BBC contributor grows close to unnecessary and tangential. The sheer amount of commentary and characterization of not only Luanda but also its inhabitants is otherwise naturalistic and accessible. Notably, Stephen Henighan’s translation never appears to soften Ondjaki’s voice, preserving tonal subtleties amid the English adaptation. Ondjaki instills a sense of urban congestion throughout his discourse without unnecessary convolution.

Through his examination of economic collapse and personal desperation, Ondjaki’s wit rises. Transparent City never quite hits satirical notes as dire as a text like Mustafa Khalifa’s The Shell, but this also helps the commentary from feeling clinical or dogmatic. Ondjaki seems far more interested in observing his setting “as is” rather than prescribing a remedy.

Transparent City is at its strongest when it is momentary with its prose. The thankfully sparse moments in which the text examines a single character or group of characters for too long are when it likewise drifts from its exceptional experimentation. Regardless, Ondjaki successfully reconciles the utility of a consistent narrative thread while maintaining an utterly unique form of transmission. Contrary to his text’s namesake, Ondjaki’s latest offering is far from invisible.