We’re Still at War: Stories of the 20th Century 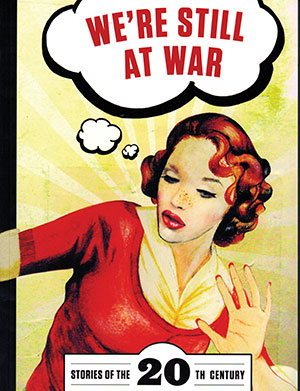 Post Bellum is a Czech organization, mainly comprised of historians and reporters, dedicated to keeping alive the memories of witnesses to the twentieth century’s historic events. In this unusual and successful volume of witness narratives, they’ve demonstrated that the graphic documentary is not only alive but thriving.

It is only in the brief afterword that the reader is introduced to the project at hand. Upon opening the very handsome paperbound book, we plunge immediately into the first of thirteen witness narratives, each crafted by a different graphic artist in varying styles, ranging from full-color painterly to grayscale neorealist to Tintin-esque comic style. The texts are taken from direct interviews and mainly written by one of a trio of Post Bellum members, Mikuláš Kroupa, David Bartoň, and Adam Drda. After each graphic section, there is a brief bio of the witness, an account of the interview, and two photos of the subject, one as a young person and one recent.

The quality of the art can be remarkably beautiful, as in “The Boy’s Done Nothing Wrong” with art by Toy Box. The panels in this story of Miluška Havlůjová have the rich look of an old master-painting-made-modern with captions and speech bubbles breaking the rules and crossing panel gutters. Miluška became an anti-Nazi resistance courier at an early age and suffered in prison for refusing to name names to the State Security Council after the war.

A more recent story of František “Porky” Stárek, “The Dandy from the North,” with art by Branko Jelinek, illustrates the persecution of the Czech Underground. Porky came of age in the 1960s and was imprisoned for publishing Vokno, an underground magazine promoting free journalism and free culture. Released in 1989, he doesn’t regret clashing with the neo-Stalinist regime even though his magazine was apolitical.

The selections vary in the quality of the art and the strength of the storytelling, but the editors were wise in their selections. Not everyone here is a hero, which adds to the very human quality of the volume—people made mistakes and suffered, but those who survived have stories to tell. These stories are well worth our attention.

Of course, the comparisons to Maus will be inevitable, as is true for every serious work of graphic narrative written since Spiegelman’s work debuted. But it does this volume an injustice not to take it on its own terms. We’re Still at War vivifies the pain and suffering of these Czech witnesses, from the Second World War through the long Communist era, and provides the reader with historical and emotional insights.