The Good Son by You-Jeong Jeong 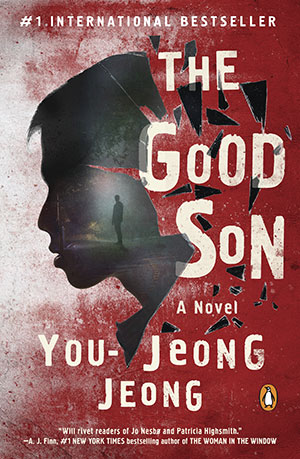 You-Jeong Jeong’s The Good Son is a precise, meticulously plotted thriller that is occasionally too precise and meticulous for its own good.

The novel begins with its protagonist, Yu-jin, waking up in his room covered in blood. He suffers from seizures. He has vague memories of the night before. When he goes downstairs, he finds his mother dead, and soon he convinces himself that the two of them had fought earlier, her in a rage, him defending himself. Soon, his adopted brother shows up. Then his aunt. Then the police. Those encounters are each fraught with tension, and the tension comes from Jeong’s prose, which spares not a single word.

This is a book of questions. It’s a book of mystery, too, but a good portion of it consists of Yu-jin talking to himself, trying to figure out what’s going on. For example: “Was that it? Did she witness the young woman being killed? Where could that have been? The docks? The sea wall?” Or: “Auntie’s words didn’t leave my head even when I went to the shower, toothbrush in my mouth. Something special. How did she know that when even I hadn’t known it until just now? Did she medicate me to suppress my nature, which craved that special something?”

Throughout the book, this technique can at times become tedious, but it’s worth noting that the line between tedium and tension can be extremely thin. For the most part, the twisty, questioning nature of the thriller works. Jeong tells when the thing needs telling and shows when the thing needs showing. At times, when Yu-jin finds himself lost in the different threads of possibility, we even get a handy, numbered list.

The mystery element of the novel, while expertly crafted, plays second to the flashback sequences, integrated seamlessly into the text. They serve to give the reader hints of “the truth” or at least Yu-jin’s understanding of it. Of particular note is a conversation late in the novel, in which Hae-jin (the adopted brother) and Yu-jin discuss the nature of death after watching the classic 2007 Morgan Freeman–Jack Nicholson vehicle The Bucket List.

The conclusion features well-choreographed action, though readers might find themselves a bit disappointed when a novel that up to a certain point had been so twisty and psychological resolves in such a comparatively straightforward fashion.

To an extent, The Good Son felt like reading a film. Doors to bedrooms containing secrets are locked “just as [the character] turns the knob.” Characters eyeball each other suspiciously. The Good Son is a perfect read for an airplane ride: it sucks you in with precision and holds your attention, leaving you with a satisfying resolution.