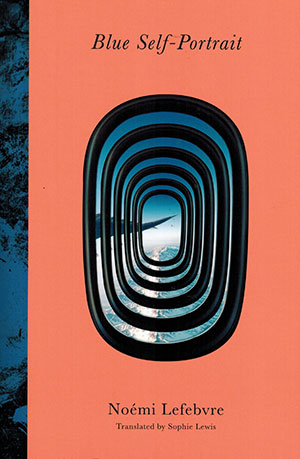 Despite being slim, Blue Self-Portrait is at once dizzying and—at times—exhausting. Lefebvre’s first novel to be translated into English is set on a plane, or rather is a stream-of-conscious monologue that takes place while the unnamed narrator is flying from Berlin to Paris, where she and her sister live. The two had taken a much-anticipated trip to Berlin, and while there the narrator met a composer-pianist whom she fears she has upset by talking too much. Returning again and again to their shared fascination with composer and artist Arnold Schoenberg (the name of one of his paintings gives the book its title), she mulls over her shortcomings and the ways in which she fears she ruined their time together. Interspersed within her brooding cycle of regrets are thoughts on the relationship between the German art world and Nazism, collective happiness, her failed marriage, and her sister’s pleasure at the experience of flying.

The narrative is a roller coaster, moving quickly from thought to thought with little break between ideas. But as the ninety-minute flight wears on and her near-manic internal monologue goes on, the narrator’s unreliability becomes apparent and a darker edge is exposed. Comments by others are dropped into her memories of conversations, such as when her sister tells her that she is not “disturbing” as she has insisted for much of the book. It becomes clear that she is hyperaware of how others see her and of how she fears she is being seen, her own self-ascribed flaws becoming more defined in the eyes of others. She accuses herself of being thoughtless, particularly in regard to the needs and wants of others, even as she registers their behavior in minute detail. Self-deprecation gives way to a sense of underlying anxiety and self-loathing that is unsettling, her internalized fears that she is not the right kind of girl so deep-seated that she tears herself apart looking for her own mistakes.

By the time she lands, the narrator hasn’t puzzled through to any clean conclusion or made herself feel any better. But the lack of closure, rather than being disappointing, leaves the reader to ponder the at-times humorous and at-times uncomfortable pressures under which this young woman has forced herself to live.