The Bottom of the Sky by Rodrigo Fresán 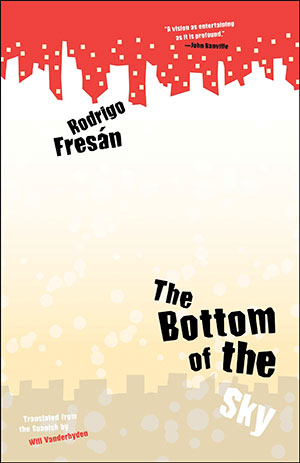 This intricate novel is packed with ruminations on scientific research, mortality, and the military-industrial complex, but at its core The Bottom of the Sky is about the ways in which fantastical fiction can help us make sense of real-life adversities. These are earnest ideas, and Rodrigo Fresán handles them with admirable finesse. If the Argentine writer’s characters sometimes seem bound for certain doom, they’re nonetheless buoyant; when this world proves too distressing, they resolve to build a better one.

The bulk of the book is narrated by a melancholy New Yorker named Isaac Goldman. He’s a boy when his mother dies during the 1918 flu pandemic, a tragedy that’s soon followed by his father’s suicide. Young Isaac moves from Brooklyn to his uncle’s Manhattan apartment, where his cousin Ezra turns him on to science fiction. For awkward teens coping with loss and the Great Depression, tales of spacemen and distant planets are immensely powerful. “We were bad athletes and got cripplingly nervous in public,” Isaac recalls, “so, instead, we flew with our minds.” Anointing themselves the charter members of a collective called the Faraways, they start a sci-fi magazine and circulate it among friends. Their insular circle slowly expands, gaining its first female member, whose importance grows as the novel progresses.

Isaac eventually becomes a somewhat successful writer, but he’s shaken by Ezra’s unexplained disappearance. Eventually, it emerges that since the start of the Cold War, Ezra has been working undercover for various US government agencies. Shortly after learning what his cousin has been up to, Isaac receives a puzzling piece of mail: the opening pages of an unsolicited, unsigned manuscript about “the last inhabitant of another planet.” More and more chapters arrive, and in time, Fresán takes us inside this mysterious document, deftly blending fanciful and realist storylines.

At key moments, Fresán’s prose turns incantatory and deliberately repetitive; in one chapter, he begins seven consecutive paragraphs with “They say.” Though this can be effective, it’s a technique that he employs a little too often, perhaps. But this book’s flaws are minor when compared to its narrative vitality. Some horrors are almost impossible to confront head-on, and it can take the proper medium—in this case, an engrossing paean to science fiction—to help us understand them.