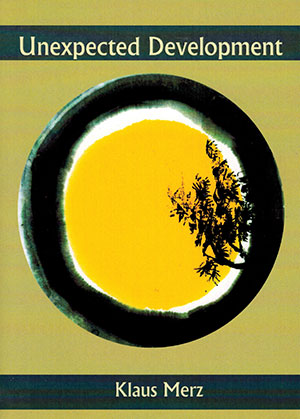 The Swiss poet Klaus Merz’s Unexpected Development (Unerwarteter Verlauf) appeared this year with White Pine Press, accompanied by translations by Marc Vincenz. In the following I will consider these elements of the text separately.

While linking a poet’s work to his place of origin is a commonplace, it nevertheless applies to Merz. His Alpine homeland inspired the concept of the sublime, and yet for natives such mountainside epiphanies must seem almost mundane. Merz’s slender, terse poems interrogate notions of sublimity, focusing on the aesthetic and philosophical relationship between the external, cosmic environment and the internal, earth-bound self.

In the first section, “Aus der Forschung” (Research Shows), the first line of the opening poem “Im Rückwärtigen Raum” (In the Backwards Space) dismantles the dichotomy between inside and outside: “Was alles so wächst / In uns und um uns” (“What things grow / In us and around us!” [my translation]). The next section, “Gang um den Felsen” (literally “Walk Around the Rock”), abounds in actual place-names, including Mondsee in Switzerland and Passau in Bavaria, which suggest an eschewal of philosophical abstraction. However, as in medieval literature, every journey with Merz represents an existential quest. The theme of travel recurs in the third section, which consists of the poem “Heißer Friede” (Heated Satisfaction). Since Merz’s gift is for the singular, sudden aperçu, this longer poem’s synesthetic evocation of music seems strained. The final sections, “Kostbarer Augenblick” (A Precious Moment) and “Geglückte Genesung” (Successful Convalescence) continue Merz’s exploration of the interface between the self and the cosmos, but with new themes of mortality, love, and intimacy arising in the latter.

Sadly, the translator, Marc Vincenz, does not meet the challenge of Merz’s precise poetic idiom. Take the poem “Kurswechsel” (literally “Change of Course”): “Der Sehnsucht nach / den Vorhöfen des Herrn / Folgte die Wut auf das / Hofhalten der Herren.” Vincenz’s translation reads: “A yearning for / the courtyard of the Lord / followed the fury arising from / courting the Lord.” Vincenz’s rendering reverses the sequence of emotions and utterly obscures the theme of social justice. A more accurate translation would read: “The yearning for / the Lord’s courtyards / was followed by rage / at the lords’ holding court.”

The desire for divine union precedes fury at the earthly hierarchy. It is a pity that the reader most vital for Merz’s English-speaking audience did not give these poems the attention they deserve.