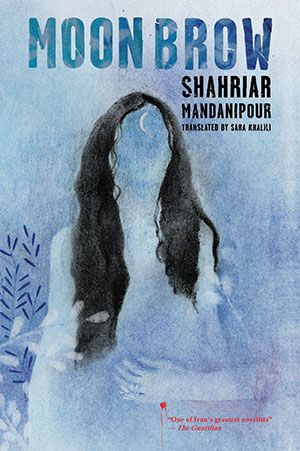 It would be an understatement to call Moon Brow, the latest novel by Shahriar Mandanipour (translated from Persian by Sara Khalili), anything but “world literature.” Moon Brow is both an Iranian novel and an example of the present global context that enables and, in Mandanipour’s case, forces literature to cross boundaries in language, theme, form, and style and offer a message beyond a singular national context or moment. Mandanipour, living in literary exile in the United States since 2006, seems to thrive on the idea of doubleness. Perhaps it is fueled by the predicament of a writer who has lived through one set of national contexts and stories and finds his oxygen for writing about those events outside his country in the strangeness of exile. Mandanipour’s previous novel, Censoring an Iranian Love Story, which received widespread acclaim when it was published in 2009, is built on two interlinked stories.

In Moon Brow, the double effect is conveyed through a literary device that echoes both an older folkloric and Quranic reference and a newer, more fractured sensibility that conveys the effects of the narrator’s PTSD—two angels (one, the angel of virtue, and the other, the angel of sin) sit on the shoulders of the protagonist, Amir Yamini, a wounded veteran of the Iran-Iraq War, and narrate his story in the twinning of his past and present. The angels give the reader Amir’s evolving psychological development first as a reckless, philandering, violent, and confused young man who defies his privileged, religious family, and then in the aftermath of enlisting as a soldier to fight in the war as a traumatized veteran who has lost his arm on the battlefield. By the time he is found by his mother and sister in a mental hospital, Amir has lost most of his memory. But he is haunted by the memory of having fallen in love with a mysterious woman whom he calls “Moon Brow” while he was away at war.

All Amir can recall is that Moon Brow was his true love and that they had exchanged rings. Because he cannot remember his past, he must rely on his sister, Reyhaneh, to tell him what she remembers about his life before he ran away and joined the army. The two angels slowly reveal details about the mysterious young woman, but Amir is plagued by the need to find her since it is the most potent and immediate memory he has of his broken life. Once he has exhausted his sister’s memory, Amir pulls in every favor he can think of to find the ring that was lost with his left arm and hand on the battlefield so that he can learn the true identity of Moon Brow. Although it is easy to lack empathy for Amir when we discover what his life before the war was like, his quest to uncover the story of his love for Moon Brow imbues him with a human fallibility that evokes a need to see Amir made whole again.

Like his previous novel, Mandanipour is concerned with the idea that readers glimpse both the specifics of Iran and Iranian history (his novel is replete with references to the events of Iran’s revolution and aftermath) but, more importantly, engage with the ideas of freedom and restriction and of the power of love to transport us beyond social, spiritual, and political confinement. He draws our attention to both the possibilities for freedom and redemption as well as the soul-crushing realities of war and power to imprison the human soul and psyche. Mandanipour’s ambitious and highly complex novel demands from his readers an attention to the much bigger questions of human life—both the idiosyncratic and the predictable as well as the comic and tragic. His highly inventive and playful writing as well as Moon Brow’s structure cast the reader into a psychological minefield that captivates and leaves us in awe of the writer’s ability to move from the historical and political reality of his own society to the poetic and elusive power of universal human love.