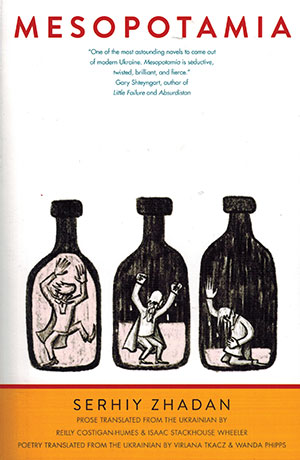 First published in 2014 at the start of Russia’s war in Ukraine’s east, Serhiy Zhadan’s Mesopotamia tells the story of Kharkiv, Ukraine’s poorly understood eastern metropolis situated between two life-giving rivers. Zhadan’s goal, it seems, was to tell the story of his hometown, something he felt he could achieve through nine vignettes, each centered on a different man living in Kharkiv—truly the main character—all of whose lives are tangentially related. He shies away from nothing, diving into the city’s degeneracy with relish. Zhadan doesn’t flinch as he describes the boorishness of immature men, a culture of drinking and violence, an incel-type determination to conquer far superior women, and, yes, nonconsensual, statutory incest. You read that correctly.

By presenting rape in the same light as lust, gluttony, and sloth, Zhadan accomplishes a masterful leveling of all wrongs. The capital vices are dabbled in by all of us at some point—not so with sexual assault. It doesn’t matter that he’s not out to promote the full-scale treatment of women as objects; he does so implicitly by proffering and not sufficiently condemning it (or his characters). To the extent that it is present at all, his irony is too subtle.

Beyond the global insult, this is truly a shame, for it stains what was otherwise a decent work. Zhadan, foremost a poet, does best when he eulogizes the landscape and daily life of Kharkiv. His dialogue, as rendered by a bevy of translators, is snappy, and he occasionally surprises with an astute musing on the human condition. His verses, which comprise the second section of the book, also offer a more egalitarian picture of sex and love while still exposing the underbelly that makes Kharkiv Kharkiv. He is undoubtedly capable. But it’s not my responsibility to sift through the sexism to find the worthy passages. Excusing transgressions like this as “not seeing the forest for the trees” perpetuates the climate in which women continue to be treated as second-class citizens. Serhiy Zhadan is an adult and as such needs to be held accountable for the consequences of his prose, which is very popular in Ukraine.

It’s clear that Zhadan loves his city; hopefully he can learn to love all its inhabitants equally.