The Radio by Leontia Flynn 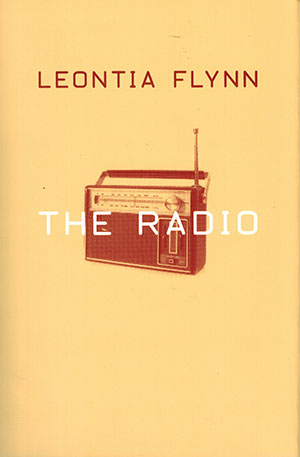 Our grandparents warned us of the existential dread that the modern world would eventually bring to us, and in her book The Radio, Leontia Flynn gathers those anxieties and weaves them into a tapestry of contemporary lyric drama. The poems are chaotic and finely tuned. They are love in the time of LOL. They swear and pray and grapple with our fear of losing our humanity—or our fear of humanity. Flynn drives us with tech-driven poems that we recognize intimately as features of contemporary Earth.

Leontia Flynn’s conversational language in this collection allows for an uncomfortable intimacy through subjects like politics, media, and even responses to modernist and midcentury writers. The speaker of the poem “I Can’t Say I Love You” gives us a glimpse into what contemporary love looks like when she says, “I can’t say I love you more than, like, my kidneys / S –, you old joker. If you weren’t so good / I’d hate you the way I hate – well – everyone.” The casual use of “like” here, used so freely in speech (as if it were a piece of punctuation rather than a simile or verb), signals the angst of Generation X and apathy of ’90s teenage drama. It begs the question, Is it selfish to love one’s self first (or one’s kidney)? Counter to traditional love poems, this professes simply to not hate the addressee. It is brutal and quick and could read as a text message or brief email; even the verbalization of the left swipe on Tinder. It is, perhaps, the epitome of twenty-first-century love.

>The final section of three in the book, “Poems Conceived as Dialogues between Two Antagonistic Voices,” is a fascinating marriage of traditional script used as poem and the existential oddities we face in the twenty-first century, such as the noise of virtual reality. Each subsection here lists the full names of characters with brief descriptions to set each scene. The third lists the characters of “Mother of Older Child, Imploded” and “The Awesome Voice of the Internet,” with direction notes of “The Scene is everywhere/nowhere.” This surreal universe can only rationally exist in the form of a poem after the litany of contemporary absurdity already explored in the collection. We are called to see that we have all plugged into the Matrix—the Internet—a self-proclaimed deity grasping to control humanity that says, “I’m the Bright, White Spirit of the Age, / you, if you will, are just some sagging hausfrau, / your gut a bag of fat, LOL, in your lap – / I’m sorry: redact. Delete. Report Abuse.”