I Didn’t Talk by Beatriz Bracher 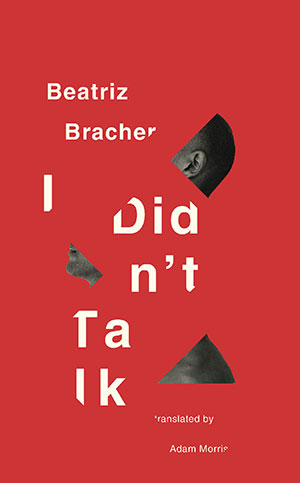 I Didn’t Talk, Beatriz Bracher’s first novel to be published in English, revisits the Brazilian military dictatorship that lasted from 1964 to 1985, tracing the impact it had on multiple generations. The narrative follows Gustavo, an educator who was picked up and then released by the military in 1970, and who holds himself responsible for his brother-in-law’s death at the hands of the government following his own arrest. Gustavo finds himself at a turning point: selling his family home and moving away from the city to retire. At the same time, a young writer planning a book on the dictatorship years asks to interview him about his experience at the time, which leads him to try to untangle his memories of the era.

Told largely in stream-of-consciousness style, the book weaves Gustavo’s retelling of his own memories with extracts from the personal papers of his friends and associates that he finds as he’s preparing to move out of his family home. The content of these papers often conflicts with Gustavo’s own memory, leading him to question how things really happen. Bracher uses this as a clever commentary on how the same experiences—particularly in the context of family life—are processed differently by individuals. Of particular interest is the unpublished manuscript written by Gustavo’s brother, José, in which he fictionalizes their family life, shifting details just enough so that his version of the story replaces Gustavo’s own memory.

While the central question—did Gustavo give away his brother-in-law?—serves as a locus for the book, it is really an extended meditation on a variety of topics: the (un)reliability of memory, the meaning of education, the way members of families see one another, and the crushing impact of the dictatorship years on generations past and present. Translator Adam Morris deftly renders Bracher’s conversational style, chasing Gustavo as he skips from one topic to another, lost in the haze of memory.