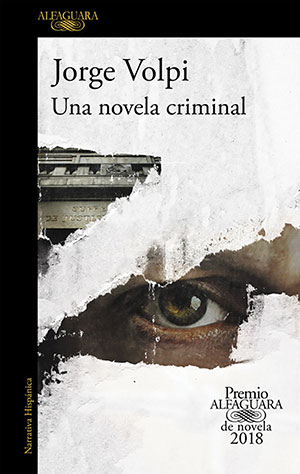 Mexican novelist Jorge Volpi has won the 2018 Alfaguara Novel Prize with Una novela criminal, a documentary novel examining the use of illegal tactics by Mexican law enforcement in the fight against the scourge of kidnappings that has afflicted the country for decades. On December 9, 2005, Mexican police staged the capture of Israel Vallarta and Florence Cassez, whom they claimed were the ringleaders of a kidnapping gang later named the Zodiacs. Mexico’s major multimedia conglomerates covered the farce on live television and, along with police authorities, perpetuated a hoax that led to the torture and destruction of many innocent people. The police rolled out three kidnapping victims, who likely were real victims of an unrelated case, for display in broadcasts that created permanent doubt and confusion in the Mexican populace regarding the guilt or innocence of the accused. In the broadcasts, Vallarta, who had obviously been tortured and was under duress, was coerced into answering questions from reporters.

The authorities, and in all probability the media, did not expect their fiction to be exposed. Vallarta and Cassez were not arrested on December 9 but on an earlier date. Additionally, no one had foreseen the impact that Cassez’s arrest would have for the case. Cassez, a citizen of France who was originally sentenced to ninety-six years in prison, garnered the support of two French presidents in her seven-year tribulation in Mexican jails before finally gaining her freedom in 2013. As the travesty was exposed, the authorities continued to promulgate the idea that Israel was the ringleader of the Zodiac gang, and other members of his family were arrested, tortured, and jailed. Although he has not been sentenced, more than twelve years after the nightmare in which he was forced to participate in his own staged capture by Mexican authorities, Vallarta remains in prison. Prior to 2008, when Mexico instituted judicial reforms, there was no presumption of innocence in the country’s courts. The author sadly notes that many of the changes, which are on the books, have yet to materialize in practice.

Volpi, an accomplished writer interested in ethical issues, skillfully re-creates the events of this egregious violation of civil and human rights. Although he characterizes his work as a “novela documental” or a “novela sin ficción,” he admits that there are places where he has used his imagination to fill voids in the records and coverage of these events. He also struggles to sort out the fictions from the facts of the case. Over a three-year period, he read everything written about this episode, reviewed all related media, and interviewed many of the principal participants. With this preparation, he thoroughly dissects this highly controversial and complex case, introducing numerous institutions and powerful individuals within and outside the Mexican government who played, or may have played, a role in this ongoing injustice.

With Una novela criminal, Jorge Volpi has added his voice to the denunciation of abuses in the case of Israel Vallarta and Florence Cassez with an impressive documentary novel that is informative, captivating, and disturbing.