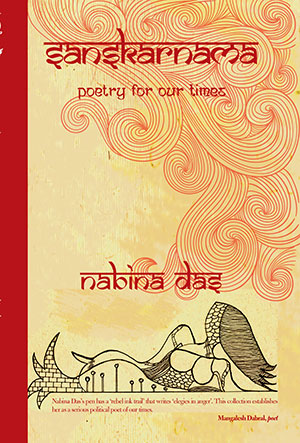 The word “Sanskarnama” is a curious mixture of Sanskrit and Persian meaning “a chronicle of culture.” Nabina Das, in her collection of searing poems, has used this word effectively to record her displeasure with the current ruling setup in India bent on preserving Sanskrit (representing Hinduism) and erasing symbols of other religions. Thus, Nabina writes, “My pen is downright anti-national now / It follows the rebel ink trail and writes elegies.” India, now, is a “land (where) dreams invite slaughter” and where “[t]he patriots chant ram, ram, they drum / Evil beats, and my deities look sad.” Sometimes, the situation is so bleak that she entreats the reader to “Take a white page. Slowly blow / Out the black letters . . . See how erasure becomes a norm.”

While Das’s poems remain intensely and directly political, there is another strain in her that cannot be put down. For her, battles are not merely for political change but also for love. Thus, in the same breath voicing a political protest, she can say, “Must we say sorry – soft, soft, say it soft – and retreat for love? / For you the Judgement Day, while I await his tender gaze.” So, not only brimstone but also flowers rain down from the skies of her poetry.

Of course, she describes herself as “[a] little wanton, a little awaara, somewhat misfit,” but her love for all women rises above because for her that’s one rebellion which really matters. From this basic stand flows her concern for the systematic attacks on women. She prophesies that “[i]n this land, praises are only for goddesses / Sanskar only for the pious,” while later she observes that “[a]lways down, a woman will remind / Them of slaughtered animals, a body gone limp.” This is reminiscent of a recent event in India where an eight-year-old girl was raped and killed only to show the authority of a race, community, and culture over the other.

Despite all this, Das, like a true poet, unhesitatingly concludes, “We become the river, we the verse.”