Enlightenment Now: The Case for Reason, Science, Humanism, and Progress by Steven Pinker 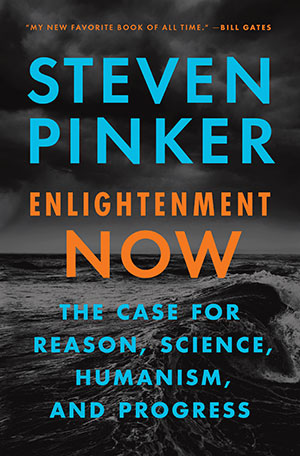 The heart of Steven Pinker’s important new book is in its title: Enlightenment Now. It is a stalwart defense of the ideals of the Enlightenment, recasting them “in the language and concepts of the twenty-first century.” The “Now” in the title and the timing of the book’s publication are by no means coincidental—Enlightenment Now appears both universally applicable as well as acutely relevant in today’s global sociopolitical climate.

Pinker divides his book into three parts, using the first to set out what enlightenment is; he identifies humanism—the striving for the flourishing of all humans—as setting its goal and reason and science as guiding its methodology. In the second part, he embarks on a tour de force through fields as diverse as happiness, war, and knowledge to show how, over the last centuries, humans have evoked Enlightenment ideals to bring about substantial progress in each of them. One of the book’s most impressive features is that Pinker’s arguments are not only made in his usual wit and multitude of cultural and intellectual references but also come with a rather impressive wealth of data and historical trends, be those the global decline in extreme poverty and war or the global increase of life expectancy, knowledge, equality, and happiness. Following the staggering optimism of the book’s second part, Pinker places his defense of Enlightenment ideals in the third, cautioning us that progress will not continue inevitably—it is contingent on the ideals that underlie it.

One might view reason, science, and humanism to be self-evident. Sadly, history and current events remind us otherwise. And arguably even more important, our own personal biases might infringe on these ideals much more heavily than we are ready to admit.

In an age of rekindling nationalism and xenophobia, a defense of democracy, reason, and science is increasingly necessary. Where “[i]n area after area, the world has been getting more rational, [t]here is . . . a flaming exception: electoral politics and the issues that have clung to it.” Throughout the book, Pinker uncovers patterns and fallacies of human thought, which become particularly relevant in our political tribalism. Both on the left and on the right, we subscribe to ideas and vote not primarily for content but for identity alignment. We tend to quickly forgive the indiscretions of those in our own party while rejecting ideas that we might otherwise endorse, purely based on our party’s position.

Public discourse today, particularly in the US, is dominated not only by an ever more divergent dichotomy of positions and methodologies but also by rising negativity and fatalism both from the political left and the right. However, Pinker argues that such a “bleak assessment of the state of the world . . . couldn’t-be-more-wrong,” pointing toward the difference between episodes that shape our perceptions and longer-term trends that frequently directly contradict these perceptions.

Some may be critical of the level of optimism that Pinker shows for such momentous issues as climate change or artificial general intelligence. Others have spoken out against the case that Pinker makes about the antireason tendencies of universities and the political left more generally. But regardless of one’s views on such points, Pinker’s Enlightenment Now comes at a crucial time, in which we have to concede that “the end of history” as proclaimed by Francis Fukuyama in his synonymous 1989 essay is neither in sight nor—perhaps—will it ever be. We have not reached “a consensus over the humanly best form of governance” and must realize that not only now but always now is the time when the ideals of the Enlightenment are in need of defense. Pinker puts this most eloquently by quoting Friedrich Hayek in saying: “If old truths are to retain their hold on men’s minds, they must be restated in the language and concepts of successive generations.”