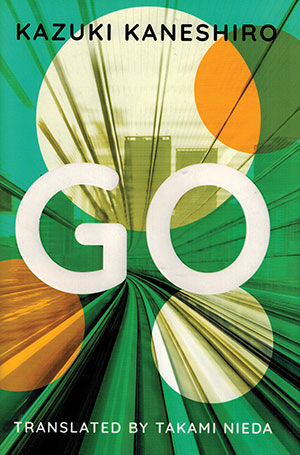 Kazuki Kaneshiro’s (b. 1968) Naoki Prize–winning Go begins with a famous epigraph from Romeo and Juliet and sets, thereby, both the scene and our expectations. The “rose” we are asked to ponder is Sugihara, a Zainichi (resident of Japan) Korean whose quest for recognition as a human being deserving dignity and basic rights forcefully asks the reader to consider “What’s in a name?” Although Sugihara has concealed his name and transferred to a Japanese school, a move that brands him an “ethnic traitor,” he cannot escape the fetters of his birth nationality.

The story, adeptly translated by Takami Nieda, interleaves two related narratives: that of Sugihara’s understandably violent progress through the gauntlet of life in Japan as a minority and his unexpectedly tender efforts to understand and, ultimately, keep vital his relationship with Sakurai, a mysterious Japanese woman he meets at a party. The tension between these two threads, and the ease with which the story weaves them together in contrapuntal commentary on both love and resentment, situate Go comfortably in the pantheon of other works of youthful rebellion. Hence, the epigraph.

The protagonist is redolent of other literary rebels such as Holden Caulfield. Kaneshiro is not in the same league as Salinger; however, his protagonist’s anger is palpably, viscerally real, although directed toward a discriminatory society rather than adults in general. Sugihara’s seemingly blasé attitude toward the violence that surrounds him masks both his and the author’s, we might infer, long-simmering frustration toward an unforgiving system that seeks to trap him even as he strives to live a life free of prejudice by whatever means he might. His frustrated narrative drew me in as few books have done . . . and against my will. The epigraph already told me all I needed to know, I had thought, and being pulled in by a story so well worn was not the message.

Because I found Go to be more satisfyingly compelling than I had imagined, I was doubly frustrated with the dénouement. The end twist seems calculated to corral the novel into the narrowly defined pigeonhole against which it so resolutely struggled. It was not so much the pat ending as its swiftness that rankled. Even so, Go is a novel well worth reading, one that offers a sobering insight into racial conflict and social justice.