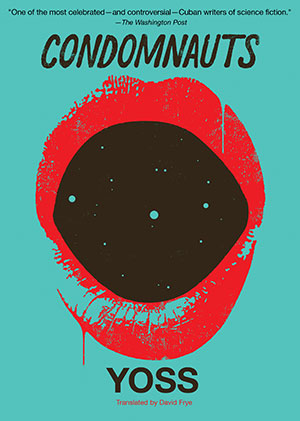 Two things happen in Cuban science-fiction writer Yoss’s third novel in English. First, Josué Valdés—once an orphan living in the radioactive wastes of Havana in the twenty-second century on a world devastated by nuclear warfare, now a Contact Specialist or condomnaut contracted to negotiate trade with the Milky Way’s thousands of alien species on behalf of the Spaniards’ Nu Barsa colony—has sex with a biomorphic alien replicant of his preteen love. Second, he has sex with a giant extragalactic cockroach and, in the process, becomes a hero, single-handedly solving the galaxy’s need for a new source of faster-than-light travel after the Qhigarians, a species who previously controlled all hyperjumps with their minds, leave the galaxy.

Of course, this wacky tone and eccentric approach to science fiction is a hallmark of Yoss, whose previous two novels, Planet for Rent (Restless, 2015) and Super Extra Grande (Restless, 2016), announced him as an offbeat, satirical master of the genre. Yoss is described variously as a Cuban Douglas Adams, Rabelais, or Swift, though none of these does justice. As Condomnauts attests, Yoss melds criticism of imperialism and colonialism, capitalism and communism, heterosexuality and the sex trade, and more with an intimate knowledge of literary history and American science fiction, invoking such figures as Ursula K. Le Guin, Clifford Simak, and Philip José Farmer, to name a few.

Condomnauts is told in a meandering, near stream-of-consciousness style—a narrative strategy that allows Yoss to build an incredibly complex world in a short amount of time. In a novel with little plot development, readers learn about the many social and political conflicts layering Josué Valdés’s world, including the events that led him to the diplomat/sex worker life of the condomnaut. This role fulfills the Protocol of Contact (aka sex between representatives of both parties) that serves as the only form of trade negotiation among alien species of the Galactic Community. Josué surmises this arrangement was created thousands of years ago as a means for the Qhigarians to extract DNA in their quest for information and self-improvement (not unlike the Oankali of Octavia Butler’s Xenogenesis trilogy). Yoss describes the impact that humanity’s introduction to the Galactic Community fifty years before the novel’s present had on humans’ acceptance of homo- and bisexuality, charting the ways in which sexual “perverts” like Josué became central to humanity’s success as a space-faring species.

Often, however, it seems as though this is the “joke” of the novel, the humor hinging on whether the idea of “perversion” remains funny for two hundred pages. At the same time, that Condomnauts emphasizes sex work as the basis of intergalactic trade (and of the colonization of new worlds during “first contact” scenarios) suggests a deeper criticism of the imbricated structures of capital, empire, sexuality, and (non-)human bodies. Thus, it is “normal” for Josué that he grew up among orphans who mostly sold their bodies, starting at eight years old, to survive, and who experienced traumas that either got them killed or forever changed them. Josué’s own trauma—being forced by an older boy to sleep with a “whale” of an eight-year-old girl when he was ten—is meant to be (fatphobically) funny but points to the deeper relations between sex, sex work, and survival in the new galactic order of things. As Yoss’s satirical story of the poor Cuban from a radioactive wasteland who becomes a celebrity sex worker and saves the galaxy through “perversity” shows, even if heterosexuality has lost its structural power, the future doesn’t look so great.