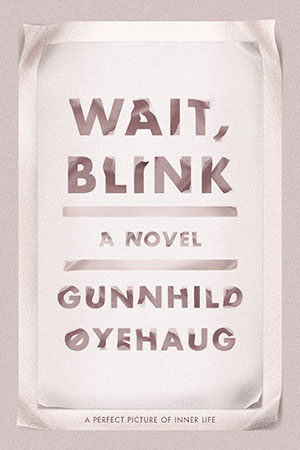 In Wait, Blink, Øyehaug uses oversized men’s shirts as a metaphor to ponder her female trio’s vulnerability. This innovative metafiction explores the creative and romantic lives of Sigrid (literature student and aspiring writer in Bergen), Linnea (would-be film director in Copenhagen), and Trine (performance artist in Oslo). Sigrid has a crush on Magnus (her boss who has a girlfriend) but then falls for a book jacket photo of an author named Kåre, who’s just broken up with Wanda (or thinks he has). Then he meets Sigrid. Linnea still misses married Göran—unaware that her producer, Robert, thinks she’s sublime. Trine wants to avenge Knut, her baby’s father who left. Then there’s the fishmonger’s teenage daughter, Elida, who pines for the older Viggo.

In an ideal world, people would say what they think. Since they don’t, Øyehaug shares characters’ thoughts as stories advance, loosely intersecting. Interior psychological monologues play as if a neuroscientist exploring the conscious mind had reset a functional fMRI to fictional.

Øyehaug rotates seamlessly from Viggo making espresso to Sigrid and Kåre eating onion soup at a café. She probes each woman’s artistic medium, looks at motherhood, considers beginnings and endings of relationships. Characters read Dante’s Divine Comedy and Cervantes’s Don Quixote as Øyehaug pursues the theme of one-sided love—employing Beatrice and Dulcinea as “narrators and guides.” A golfing photo of father-son duo George and George W. Bush keeps popping up. We study a seabed off Greenland. Sofia Coppola meanders around. Fulgurites form when lightning strikes sand. Øyehaug dissects dreams, café etiquette, and PTSD. The novel nods to Balzac’s La Comédie humaine and Saroyan’s The Human Comedy, while suggesting the style of Dag Solstad. Yet the key may be in Øyehaug’s epigraph by Daniil Kharms, who also experimented with storytelling and saw a world within each self.

Wait, Blink is a witty and cerebral braid of events both real and fictional—driven by self-talk, undergirded by literary criticism, and sprinkled with factoids.

Or as the subtitle foreshadows: “a perfect picture of inner life.”