All This I Will Give to You by Dolores Redondo 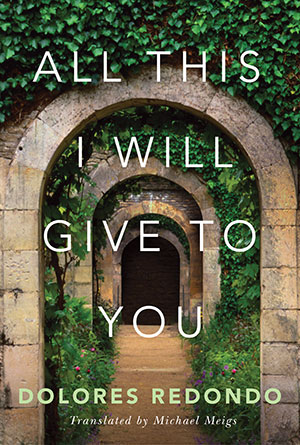 One expects a thick novel to be expansive in theme or epically cover a great deal of time and territory, but lately several mysteries, especially in translation, have been showing up with all the heft of One Hundred Years of Solitude or The Brothers Karamazov. At 478 pages, All This I Will Give to You is by Spanish novelist Dolores Redondo, whose Baztán Trilogy (set in the Basque country) has sold a million and a half copies in Spanish and been translated into thirty-five languages. Her books have been nominated for several major awards, including the Crime Writers Association International Dagger for novels translated into English.

All This gets its title from Satan’s offer to Jesus in the wilderness and begins with the main character, Manuel, a novelist, being notified that his husband, Álvaro, has been killed in a car accident on a lonely road in Galicia. He was supposed to have been conducting business in Barcelona on the opposite side of the country. Almost immediately, mysterious details begin to accumulate. Álvaro has been keeping the secret that he is from a titled family, and Manuel learns he has inherited all of Álvaro’s possessions. No one in the family is very happy with the gay husband of their estranged scion becoming lord of the manor, even though Manuel, offended by Álvaro’s keeping this immense secret from him, has no interest in claiming any of the estate.

A chain-smoking retired cop, however, convinces Manuel to stick around for a while and investigate what he suspects was no accident. Gradually, family secrets are exposed, Manuel develops colorful allies and enemies, such as an amiable priest and an Ethel Barrymore–type evil matriarch, and adopts a sad stray dog, and murder will out as in a proper, old-fashioned mystery.

Even with the contemporary references to gay marriage and a few pages devoted to a long-ago sexual assault in a seminary, it’s all a bit familiar, as you may surmise. The question is whether such a light story justifies the thickness of the book it fills. Reading it is, in general, pleasant, and the novel is entertaining. The prose is not overtly verbose or pretentious. Yet you have the suspicion that Agatha Christie would have cooked the same stew in a pot half the size.