Solarpunk: Ecological and Fantastical Stories in a Sustainable World 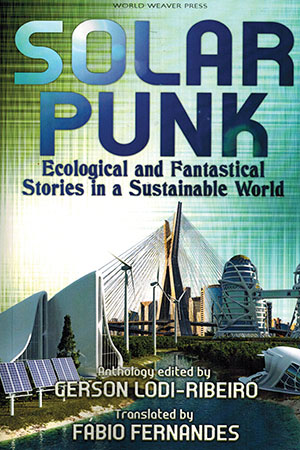 Solarpunk is the third installment in a triptych including Vaporpunk and Dieselpunk, all edited by Brazilian science-fiction author Gerson Lodi-Ribeiro. It anthologizes nine Brazilian and Portuguese short fiction stories that challenge utopian themes characterizing solarpunk written in English. Solarpunk asks its readers to “imagine a sustainable world, run on clean and renewable energies that are less aggressive to the environment.” However, this anthology does so on the premise that a sustainable future does not necessarily ensure equality, freedom, and justice.

Notable selections include the detective fiction “Soylent Green Is People!” by Carlos Orsi, which imagines a process capable of harvesting energy from the breakdown of organic matter—with some dark consequences. Another is “Escape,” by Gabriel Cantareira, which posits a sustainable future dominated by large neoliberal corporations. Finally, the gothic story “Gary Johnson” grapples with the implications of a scientific process capable of releasing energy from the human soul.

Translation is Solarpunk’s biggest problem. The translator, Fábio Fernandes, acknowledges he typically works on English to Portuguese-language texts and that Solarpunk is his first Portuguese to English-language translation. Possibly for this reason, many of the short stories are marked by word choice and grammatical errors. However, its biggest translational shortcoming is the dearth of contextual material. The stories in this anthology are strongly rooted in Brazilian and Portuguese culture and language. Consequently, it would be helpful for the anthology to include paratextual material explicating Portuguese terms, historical figures, and folklore.

Solarpunk fiction appeals to contemporary audiences interested in science fiction with an ecofriendly theme. This anthology adds a nuanced and somewhat darker conceptualization to the genre, asking readers to consider the real possibility that the end of our environmental problems does not mean the end of human problems.