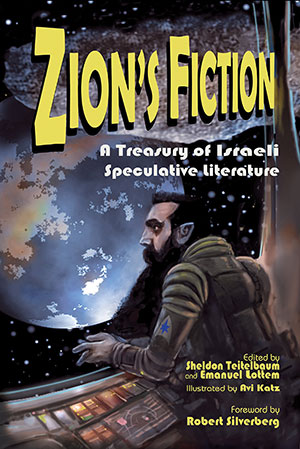 Zion’s Fiction is a project many years in the making, but it was worth the wait. In this collection, readers will find a wealth of speculative fiction from Israel that has sprung from a still-young genre scene in a nation that just turned seventy. For modern Israel is, as the introduction reminds us, an “imagiNation,” born out of the Bible and the ideas of late-nineteenth-century thinker and author Theodor Herzl. Herzl’s utopian novel Old New Land (Altneuland, 1902) was the first step in making Israel, once again, a homeland for the Jewish people.

Yet the political and religious strife that has marked Israel’s first several decades led its literary gatekeepers to shun speculative fiction, viewing it as a genre that “distracted” readers from the work of defining the nation’s values and goals. Nonetheless, science fiction, fantasy, magical realism, and other subgenres flourished, especially since the 1970s, resulting in this remarkably varied and engaging collection.

Here we have stories originally written in English as well as in Hebrew and Russian (and expertly brought into English by a variety of translators) by authors both well known and unknown in the US. These authors imagine apocalyptic wastelands, teleportation via dreams, hyperintelligent mice, a timeless library, and more. Two of the most powerful stories in the collection (“Burn Alexandria” and “A Good Place for the Night”) offer us visions of a fragile hope springing out of the ruins left behind by brutal alien invasion and an unexplained population-killing disaster, respectively.

Among the longer pieces in the collection, they are beautiful and devastating. And then there are stories like “The Stern-Gerlach Mice” and “My Crappy Autumn” that attack themes of hopelessness and devastation with the darkest kind of black humor. Magical realism and hard sci-fi, too, populate Zion’s Fiction, with stories of portal-mirrors and disappearing stars, on one hand, and accelerated evolution and spliced timelines on the other. Visions of Jerusalem alleys, orange groves, the Mediterranean, the streets of Tel Aviv, and many others infuse these speculative stories with a uniquely Israeli personality, with references to Yiddish, Arabic, Hebrew, English, and Russian reminding us of the nation’s cultural, religious, and linguistic diversity.

Zion’s Fiction is not only an excellent collection of speculative fiction from Israel but also a book that makes us think anew about the real challenges the world must face in the future. Like other recent anthologies of international speculative stories, Zion’s Fiction opens our eyes to the creativity and literary invention happening beyond our borders and makes us long for more.