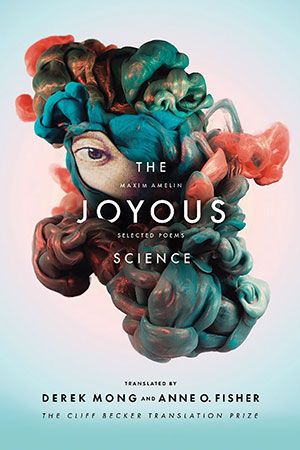 There is visceral excitement upon welcoming a new poet into one’s personal canon—it’s like collecting a little bit of immortal light—and Russian poet Maxim Amelin certainly deserves this. Born in 1970, Amelin came of age as the Soviet Union collapsed, and he has been active on the contemporary Russian poetry scene, as editor, critic, and translator; his three volumes exclusively of poetry, Cold Odes (1996), Dubia (1999), and The Gorgon’s Steed (2003), cluster in a seven-year period from which derives the present bilingual selected volume (see WLT, Sept. 2017).

The whimsical, eponymous title poem, “The Joyous Science” (a nod to Nietzsche’s early volume of the same name), is a sprawling twenty-pager, replete with Victorian-style side notes detailing “The True Story of the Famous Bruce, Composed in Verse / from the Accounts of Several Eyewitnesses.” The English translation largely preserves the original abab stanza rhymes and their whimsy, tracing the adventures of Bruce, the ultimate self-actualized man of czarist Russia.

Besides this and a couple of other poems with direct Soviet themes, Maxim’s verse tends toward the universal and timeless—it is the poet’s long lens for processing present developments. In “The Hulking Carcass of a Dead Orca” (2010), for example, “The choking scent of rancid fat, / foul and ineffable, will all / but replace the surrounding air. // Weeks will pass, months or years / perhaps, before dwellers from distant climes / discover its bare skeleton. // They will saw it down to small // ornaments, then write on these white / shards about the frailty of living.”

He sometimes calls up historical comparisons as a way to characterize our present fraught state, such as in the poem “Homer’s Been Shredded to Quotes”: “Homer’s been shredded to quotes for the billboards: / his scrolls unfurl and spread / to paper the walls, his hexameters bobbing—balloons / we tied to silk threads.”

As well, Amelin seems never too far from spiritual awakening. In “Vindictive Goddess, Statue Now Woken,” and giving a nod to the verbose nineteenth-century Russian classicist poet Dmitry Khvostov, he traces the strained trajectory of the poet from the vulgar to the spiritually profound: “How, without breaking into Pindaric odes, / can I stand by on the sidelines? / I’d blow my poetry’s fiery load / on the few years I’m resigned / to. Having removed this pearl—iridescent, / smooth—God gathers it in.”

The translations into English collected here have been a decade-long labor of love by Derek Mong and Anne O. Fisher. Their exquisite care with these gems has not gone unnoticed—earlier this year, they won the Cliff Becker Book Prize of the American Literary Translators Association for this volume. As the ALTA commendation notes, “There are even places where these translations equal or, perhaps, surpass the original in their crispness and linguistic innovation, making this collection not only a remarkable accomplishment of poetic translation but truly a pleasure to read.” What more do you need to know? This is a volume to treasure.