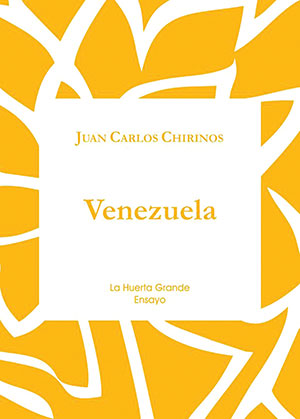 Juan Carlos Chirinos concludes Venezuela wishing that his book might be the portrayal of “a displaced soul that converges into a greater good—that of the possible, or art and ethics.” He is quoting José Balza, Venezuela’s greatest living writer, and expressing the modest hope of a younger opposition novelist for a country whose government adamantly encourages despair. Fortunately, the new Spanish publisher La Huerta Grande has a series of insightful and quirky brief essays by Spanish-language authors on contemporary topics from perspectives like Chirinos’s, whose Venezuela joins Argemino Barro’s analysis of Donald Trump’s ascendancy, El candidato y la furia.

Chirinos’s book complies with many scholarly and popular expectations because his additional expertise as a historian and journalist keeps him up to date with the pertinent data needed to construct a vehement argument, partially explained by the glossary of “essential” Venezuelanisms appended to his essay. Those and other frequently humorous explanations are meant for a general public, not for the standard bearers of essentialist patriotism who tend to demand “authenticity.” Venezuela is clearly the work of a novelist, but one who has done his research.

If the reader were guided just by the titles of its three principal parts, she would have a clear idea of the historical developments Chirinos analyzes with élan and conviction, relating a past that, not without paradox, leads to the suicidal present of Maduro and Co. Venezuela is not a diatribe against Chavismo, and Chirinos also shows the failure of the opposition, for whom going back to the old Venezuela means going back to the privileges of the upper classes.

This invigorating essay, often autobiographical, allows Chirinos to “screw around,” as he says using vivacious Caribbean slang. That does not mean that arguments are left in the air. Rather, the journalistic patterns with which he disarms interdisciplinary pretentions show discipline in summarizing over two hundred years that, constantly interlaced, show a certain consistency in the Venezuelan character, which the author assumes with provisos.

Venezuela is defined at times by what Leo Spitzer called “chaotic enumeration”—that is, a poetic listing which ultimately makes sense. If Western media are still concentrating on Venezuela’s present, emphasizing the opposition’s divisions due to a general sense of grandiosity, Chirinos—always attentive to the biases of digital sources, as in the “fake news” described in the section “Bolívar distorted in 140 characters”—provides instead a cultural panorama that reveals the lack of historical insight and ideological mysteries engendered by twenty-first-century socialism.

When he says that he wanted to “point out the likely risks that made this perfect suicide possible,” it is evident that, more than the snapshot he modestly announced, he achieves more. His final words directly address the person most responsible for the situation: “Maduro, the people want freedom, their security and your cartel’s”; with added optimism: “The people will never surrender.” The Maduro government still blames everyone but themselves, and if it has been able to decelerate the opposition, it has not slowed down the daily and greater collapse of the economy and social contract. Venezuela: Biografía de un suicidio’s circumspect snapshots confirm that savage socialism is equal to or worse that savage capitalism, particularly in cultural terms, and that its author is one of the very few with intact courage and intellectual integrity.