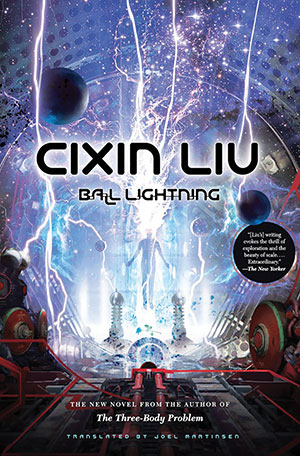 Multiple-award-winning Chinese science-fiction author Cixin Liu is having a moment in the anglophone world. Because of the 2014 English translation of his novel The Three-Body Problem, Chinese science fiction has been in high demand in the American market. Ball Lightning is Liu’s fourth book in English, the first three having comprised a hard science-fiction trilogy about alien contact and human political struggles among themselves and with the aliens. In addition to its Chinese awards, The Three-Body Problem nabbed the Hugo Award for Best Novel and nominations for nearly every major genre award, not to mention a plug by then-President Obama in the New York Times (see WLT, Sept. 2015, 63). Ball Lightning, then, has a lot of hype behind it, and while it may not be as sweeping a study of (inter)national politics, humanity, and the alien as the Remembrance of Earth’s Past trilogy, it is an important—and timely—meditation on science, weapons development, and the ways in which people confront trauma.

Ball Lightning tells the story of two Chinese nationals driven to science by loss. Chen wants to understand ball lightning, a real-world phenomenon that as yet has no scientific explanation, after his parents are killed by an instance of it on his fourteenth birthday. Lin Yun researches “new-concept weapons” for the Chinese military, a response to her mother’s death by genetically engineered attack bees during the 1980s border war with Vietnam. The novel is written in Chen’s first person and tracks in close detail his developing theory of ball lightning, his collaboration with Yun on its military application, and eventually their discovery that ball lightning is in fact macro-electrons forming the building blocks of a macro-universe. This discovery leads to another: macro-nuclei of macro-atoms, which can produce enormous cold fusion explosions.

While Yun becomes a key character early on, it is not until toward the end, when Chen decides to leave the macro-electron project after it proves destructively weaponizable, that she occupies equal characterological footing with Chen. Still, her story is relayed second- and third-hand by Chen and other men, who are both fascinated by and afraid of her emotional, trauma-driven pursuit of a weapon capable of destroying all electronics in the world or, worse, all human life.

Ball Lightning cuts into tough questions about the ethics of science and its application to weapons. There is a tension throughout the novel regarding funding for scientific research being proportional to its use in business and war. Liu also writes with concern about the ways in which political ideology shapes how scientific research is carried out. The problem, as Liu writes it, is that scientific research is too rigid, too stuck in its own self-made laws, or bent, say, by political concerns of the state, to discover what should be rather obvious. Mentors regularly chide Chen and Yun that simplicity, not complexity, is the way to understand the world.

Liu also critiques the culture of work and labor that would have people ignore the pleasure of life in favor of single-mindedly pursuing money, knowledge, fame, or glory. In fact, given that objections are regularly raised about the ethics of the militarization of science but dismissed moments later by the same characters, all because war with “the enemy” is looming (and later breaks out), it seems that the one clear philosophical position of Liu’s novel is that readers living in these neoliberal times not take the paths of Chen and Yun. Liu’s point is that it should not take technological collapse to teach us to live simpler, happier lives. But, of course, even this fetishizes the premodern and merely warns of the well-known dangers of a technologically mediated life.

On the whole, Ball Lightning is a worthwhile novel. Its best-seller status is virtually guaranteed by our memory of The Three-Body Problem, though it is unlikely to win similar levels of critical praise. For one, it is a novel that dodges any critical complexity in its engagement with the world, no matter how much Liu knows about lightning and quantum physics. With regard to (inter)national politics, gender, and even the ethics of science and weapons development, Ball Lightning either leaves much to be desired or else offers nothing but hand-wringing. Not surprisingly, it is Liu’s earlier work, written several years before his award-winning trilogy.

Still, there are incredible moments in the novel, like Chen and Yun’s trip to a derelict Soviet research facility or the hints of Chinese anxieties about conflict with the US (the last portion of the novel is about a war with an unnamed “enemy,” though their vessels all bear the names of well-known ships in the US navy). Liu’s fourth novel in English demonstrates that Chinese science fiction, the world’s largest such market, is an important archive for scholars and readers alike. Let Ball Lightning be the fifth column of a Chinese science-fiction invasion. 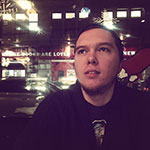 Sean Guynes-Vishniac (@guynesvishniac) is a PhD candidate in English at Michigan State University. He is editor of Punking Speculative Fiction (a special issue of Deletion, May 2018); co-editor of Unstable Masks: Whiteness and American Superhero Comics (forthcoming), and Star Wars and the History of Transmedia Storytelling (2017); editor of The SFRA Review; and book reviews editor of Foundation: The International Review of Science Fiction.