All Under One Roof by Evelyn Schlag 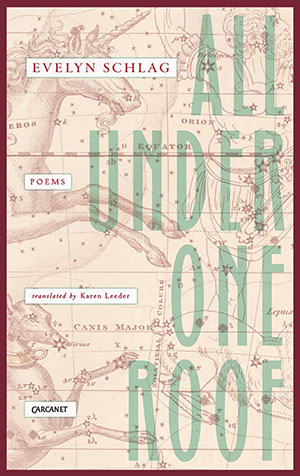 When I was very young and growing up in Boulder, Colorado, I was sure that the mountains I saw every day were a massive painting on the side of the universe rather than an actual formation of rocks and dirt. The moment I understood the geology of the place, the world in my mind quickly took new shape. The experience of reading Evelyn Schlag’s All Under One Roof follows a similar pattern of discovery, with childlike observations of the situations and places as the speakers of her poems grow in their own personal revelations. The careful translation by Karen Leeder of every aspect of Schlag’s writing is essential in understanding the depth of each image and metaphor, and where some line breaks or punctuation choices seem to clunk with the hammer of language in translation, the overall effect is that of one seeing and experiencing the world for the very first time.

In the afterword to this book, Schlag herself writes of an experience like my childhood wonderment, which begins, “As a little girl I didn’t know ‘Europe.’ There was my own country, Austria; beyond that the efficient Germany, which had once belonged to us, Russia, where the prisoners of war had worked and the bears lived . . .” and so on, almost as a genealogy of knowledge that unfolds not unlike the book of Genesis. So many of the poems in this collection are written with such candor—and without falling into cliché—that the narratives and scenes are instantly universal. >

In the poem “Where Our Skin,” Schlag wonders “when it was that the settlers’ mountains / soaked up the names of new arrivals with such ease,” as if it were a casual passing thought that anyone might have during contemplation of an intimate human relationship, where she reflects, “Before autumn we had not given ourselves to each other.” Here, the intimacy described is part of the very landscape itself, as when she writes, “Each of us turning our red foliage into the southernmost / corner of North. Secretly you slip me an extra leaf.” This love story becomes so much more than just something between two people, digging into the very core of what each of us wants of our human experiences.

Evelyn Schlag’s collection reflects on the very essence of living life in pursuit of something greater than oneself. Each poem is a new lesson in emotion or truth through the lens of a new person, place, or experience. I am struck by how much these poems affect me despite their apparent simplicity. In the poem “We Did Not Carry,” for example, Schlag writes, “Absence hurts from wherever you are,” and the line slices through to my core, and I am relieved to know, through the medicine of her words, that I am not the only one trying to make sense of the heaviness of life.