The Final Voicemails by Max Ritvo 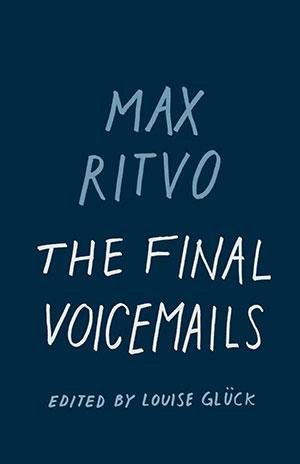 The late Max Ritvo was something of a rising star in American poetry before his death, at only twenty-six, in 2016. This volume, edited by Louise Glück, offers selections from Ritvo’s last poems along with a handful of poems from his Yale undergraduate thesis.

The undergraduate poems, which make up the second part of the book, are indeed exceptional as juvenilia, but they are truly of interest for how their efforts at surrealism and their preoccupation with the relationship of body to soul predict the most striking characteristics of the fine later poems that make up part 1. It is striking how much Ritvo matured as a poet in just a few years, but it is also striking how clearly the later poems grew out of the earlier ones.

The late poems are primarily on the subject of the poet’s illness, and they creatively and movingly explore the way we are both distinct from and identical with our bodies, a theme that severe illness has a way of emphasizing but which is also a part of everyday human experience. “Today I woke up in my body / and wasn’t that body anymore,” he writes in “Cachexia.” In “Earthquake Country before Final Chemotherapy,” Ritvo imagines his own skeleton, which he refers to using the third-person pronoun, wandering alone to the Golden Gate Bridge. This tension between body and soul often produces extraordinary imagery, as in “The Soundscape of Life Is Charred by Tiny Bonfires,” in which he writes: “I heard mostly my breath, inside of which // was a small baby suckling / my air for his milk.”

As serious as the subject matter is, these poems tend toward the whimsical, a sort of surrealist playfulness in the Ashbery/O’Hara vein. In “Tuesday,” he writes, “We haven’t moved from this pier in a couple years. / All we need to do to be happy is point out fish. // Sure, we’re just pointing at ripples, / but we know they’re fish[.]”

Very few disciples of Ashbery have come so close to equaling the master’s ability to coax a sense of mythic import out of personal life, using only irony and apparent, though belied, flippancy. This trick serves Ritvo well in enabling the reader to emphathize with rather than merely pity the dying man that speaks in these poems. This accomplishment is both an aesthetic and a moral achievement.