The Tale of the Missing Man by Manzoor Ahtesham 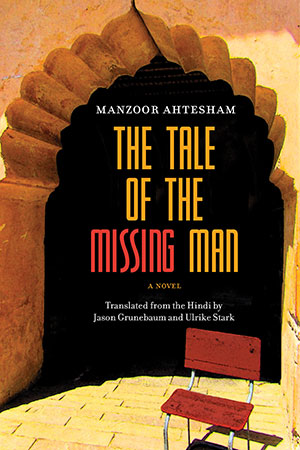 In Manzoor Ahtesham’s charming and thoughtful The Tale of the Missing Man, protagonist Zamir Ahmed Khan has a mysterious illness characterized by debilitating ennui. It has become so bad, in fact, that he’s jobless and his wife and children have left him. Zamir’s story weaves in and out of the past and present—in the present things go slowly from bad to worse, while the past is encumbered by the audience’s knowledge of where it leads. Zamir disappoints himself by falling ever shorter of his Muslim ideals by drinking and having affairs, and although he achieves his goal of having short stories published in literary journals, he uses a pseudonym and never musters up the courage to tell anyone he knows about his success. Set in Bhopal before and after the Union Carbide tragedy, the meaninglessness of his particular sadness feels even more acute, the scorn of the doctors, friends, and family he turns to for help more understandable.

And yet the book is not sorrowful at all. This is primarily because of the “authorial” intrusions, where a narrator interjects, framing the novel as not only about the minor tragedy of a misspent life but also the major tragedy of a misspent half-century of Indian independence. We stop wondering if perhaps this is a book about mental health and instead think of Zamir as a “missing man”: a not-quite alter ego, a trace of a world not quite realized. These layers dampen the sentimental aspect of the story and heighten the philosophical. As the India around Zamir progresses in a way that leaves no room for reflection, no room for anyone but those able to keep their eyes on the economic prize, we are led to wonder: what, indeed, could have been?

The Tale of the Missing Man is quite well known in the original Hindi, and the translation, by Jason Grunebaum and Ulrike Stark, captures the geographical and class specificities of tone very well, while also requiring no previous knowledge of Hindi or of Bhopal. It is an everyman’s story that asks of us: how different could we have been if we helped one another find what we were looking for?