The Overstory by Richard Powers 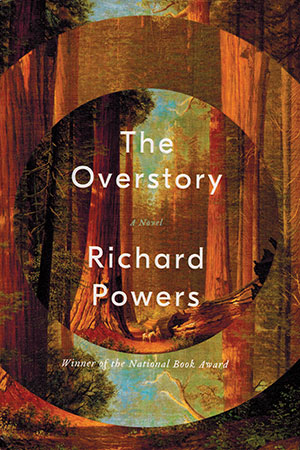 Approximately one-third of the way through Richard Powers’s The Overstory, a scientist whose findings had originally been attacked discovers that she is considered the pioneer of a respectable field. Patricia Westerford had argued that trees are “social,” form communities in forests, communicating and nurturing one another. Appropriately, her own self-imposed solitude is broken by a new companion. Building on recent studies by biologists in Europe, Canada, and the US, Powers has written a compelling novel that includes human and natural relationships. One might be tempted to say it is all about trees, but the structure keeps the focus on both.

Short narratives of nine characters dominate the opening section, entitled “Roots.” While all grow up with a relationship to a tree or trees, one is not sure whether their stories will be unified in the “Trunk” section. But it begins to happen as unlikely pairings occur, several joining a movement to stop the clear-cutting of old-growth forests. The “Crown” section is hardly triumphal, featuring former activists, now fugitives, and others approaching a painful, wider consciousness. In “Seeds,” conclusions are foregone, as characters consider the future.

Trees and forests are more complex and sensate than we have known. The world might be better served if humans simply disappeared from the planet. Some humans serve what comes to seem a superior form of life, attempting to cope with global deforestation through a massive, cooperative computer simulation and a more modest seed bank. Meanwhile, the trees communicate with receptive minds.

The Overstory is a thesis book, though hardly didactic. Even Patricia Westerford’s lecturing is gracefully phrased. Much of the thesis is embedded in Powers’s witty and allusive style, with passages you find yourself rereading, even voicing for the pleasure they bring the ear. Finally, reading is pushed by the energy of the plot. As one character says, “The best arguments in the world won’t change a person’s mind. The only thing that can do that is a good story.”

The scope of the novel is large, with characters’ perspectives and actions spreading in different directions. But the basic view of forest life, enunciated by Westerford, is the conceptual core. The core is ringed by human stories that enlarge to 502 pages of recycled paper. This is a book you may not finish or a book that will remain in mind once you finish. It confirms for me that Richard Powers is simply one of our best.