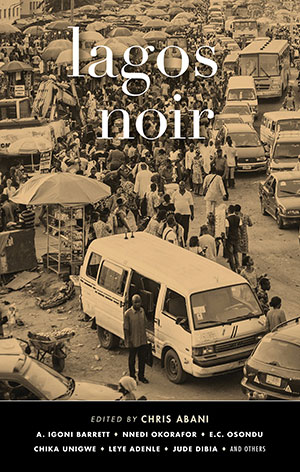 In the nearly fifteen years since Akashic Books premiered its Noir anthology, the short-fiction series has examined the criminal and often perilous reality of the most densely populated regions around the world. Continuing its trend of illuminating local literary giants and conjuring an almost mythological sense of mystery, Lagos Noir is a striking collection of prose birthed from Nigeria’s largest city.

Partitioned into three movements focused on crime, family turmoil, and migration, respectively, the text rarely stutters with the thematic corners it explores. The curation shines in blending starkly different voices as each sequential episode dovetails into the next with ease. For instance, the first part, “Cops and Robbers,” begins with a tale of police corruption, framing concepts like extortion and brutality, so the following works require little elaboration. The final part, “Arrivals and Departures,” is a bit less fluid in this fashion but still justified in its independence nonetheless.

Covering one of the widest spectrums of genre-inspired stories, Chris Abani is as masterful as he is meticulous in his assembly of noir. Whereas Chicka Unigwe’s “Heaven’s Gate” details the plight of a young up-and-comer struggling to survive in Lagos’s often apathetic streets, Wale Lawal’s “Joy” examines the dark considerations and resolve spurred from postpartum terror. Moments of action, contemplation, and dark humor yield a flavorful vision of the collection’s titular locale.

A few installments are clear standouts, but their placement does little to sabotage the weight of neighboring entries. Among the strongest, A. Igoni Barrett’s “Just Ignore and Try to Endure” tethers an unending plague of vermin with the plight of advancing one’s station in a graceful yet grotesque manner. ‘Pemi Aguda’s “Choir Boy,” on the other hand, is an abrasive chronicle of human trauma and the development of apathy in the face of violence. Though the deliberation is a bit unclear, the seemingly immortal and eponymous figure of Nnedi Okorafor’s “Showlogo” is oddly yet comically placed behind Unigwe’s tragic “Heaven’s Gate.” The mingling of myth with reality and the subtle connections between each narrative are the strongest indicators of text’s power as an anthology.

Lagos Noir is a colorful and harrowing vision preserving the distinct voice of each contributor contained within its pages. The collection carries a moving and self-contained quality while simultaneously sparking hope that the Noir series will eventually forge its way into further explorations of Africa.