Everything I Kept / Todo lo que guardé by Ruth Behar 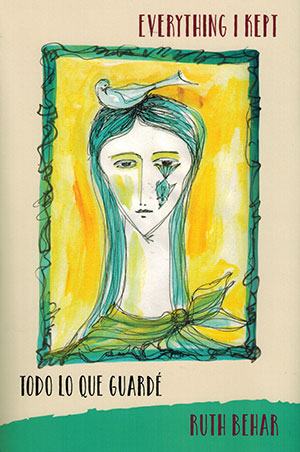 Born in Havana, Cuba, but raised in Florida, Ruth Behar explores the poetics of identity, not only as a Cuban living in exile but as a minority within a minority, with deeply treasured traditions of Sephardic Judaism. Presented in both English and Spanish, Behar’s lyric prose poems possess a deeply layered sensibility, with the deeper strata revealing multiple selves, influences, and, above all, ways to come to grips with loss, mortality, the space in human interaction where intentions are never fully knowable.

In “Pollo / Chicken,” Behar reflects upon the fact that certain acts of generosity could have been, in reality, masked and subtle cruelty. In “Cuba,” Behar explores how leaving Cuba as a child, the only place she knew and loved, affected her as an adult: “Llegué a ser esta mujer inmune a las palabras tiernas . . . a tu amor” / “I became this woman immune to tender words . . . to your love.” One might think that Behar simply explores the damaging impact of exile, but her focus is more complex, and her poetic montages show how self-reflection generates awakenings and turning points. In “Volver / Return,” the vision of her now-threadbare Indian dress hanging in her closet is juxtaposed with a memory. Behar’s poem foregrounds the mental process of gaining wisdom.

However, in being willing to see things in new ways, and in breaking free from tradition (how breakfast could consist of macaroni and cheese), she also opens herself to bittersweet nostalgia and loss. Behar captures the painful desire for the impossible (e.g., that a person long gone will return) through imagery and the refrain of a popular song by Marta Valdés. In the poetics of Everything I Kept, loss leads to what can never be lost. The kaleidoscopic panoramas of nature and patterns of behavior give rise to memory and hope (“Suddenly from the ocean far away a seagull came”). Ultimately, Behar writes beautifully of rebirth: “two crocuses daring to show their faces before the end of winter.”