You Should Have Left by Daniel Kehlmann 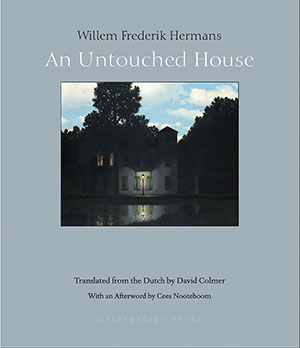 It is early December and our narrator is under pressure to complete a screenplay for a sequel to his highly popular previous comedy. He and his wife and daughter have rented a remote chalet in the Alps. Now that the daughter is four, there’s less need to argue who takes care of what with her. But this only means the parents natter at each other about everything else. She: It’s just a screenplay, it’s not art! He: It pays for the house with the yard the kid never uses! He’s suffering from writer’s block; she’s no longer getting ingénue roles. Their arguments echo in the script the narrator is sketching—and in everything else. Nothing is as it should be. The house seems to have extra rooms. Pictures appear where none had been before. And the words “Get away” appear mysteriously in his notebook, even within the script.

Low on provisions after a few days, he descends the treacherously serpentine road to the tiny village below and its one general store. As he gathers his items, the surly shopkeeper cryptically asks, “Anything happen yet?” People have been known to mysteriously disappear—lots of dangerous crevasses, and the rescue-service chief is mostly drunk. A woman who overhears this waits by his car and tells him, “Get away quickly.”

It’s certainly a narrative tour de force: as Kehlmann deftly demonstrates, a good writer can get his readers to believe pretty much anything. We are obviously to be reminded of Steven King’s The Shining, but the way Kehlmann depicts that lonely road up to the chalet may make us think, too, of the door that Kafka’s doorkeeper shuts. This is the door “before the law” that had been reserved solely for the supplicant; just as the solitary road leads only to that chalet, a chalet had just been newly built, as if expressly for him.

We are thus kept in thrall not by some lurking horror but by the skewed qualities of the narrative. We get an inkling of how off-kilter everything is getting when the narrator cannot remember the little white lie he told his daughter the first time she asks where mommy is. As Ross Benjamin conveys it in elegantly straightforward English, this is a writer who has truly gone over the edge.