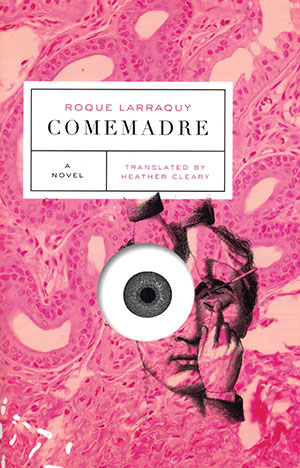 Comemadre begins in 1907 in Buenos Aires. A doctor at a sanatorium is in love with a nurse. Other doctors are also in love with the nurse. Other doctors have built a contraption to sever the heads of unwitting (and then willing) patients. The doctors have a theory: if the head can live for a few moments after being severed, perhaps it can see into the afterlife. The aforementioned head-chopper is fitted with a device to allow the heads to talk. The doctors record the results.

There are moments in the first half of this novella that ache with a kind of horrifying melancholy. The first to lose her head, for example, is a young patient of the sanatorium. She has wanted to die, the logic goes, so why not put her out of her misery? Then her bereaved lover follows suit. Then there’s a plan, and the heads really begin to roll. Throughout it all our narrator, Quintana, keeps his focus on the nurse. The doctors are mostly unfazed by the large-scale murder.

A scene toward the end of the first section, in which a great number of decapitations yield brief descriptions of post-severed utterances, is the highlight of the book. It’s sad, funny, and pitch-perfect. The 1907 portion ends on a dark, accurate note, and one can’t help but wonder if the book would have greatly improved from simply ending there.

The second half of the novella jumps forward in time a hundred years. A performance artist and his look-alike stage shows featuring severed body parts, eventually their own. It’s in this second half that Larraquy seems to lose a bit of focus. Whereas the 1907 half is darkly comic and focused, the 2009 half feels like it’s falling apart page by page. Which, when put into the context of degeneration and severing and corporeal decay, makes a bit of artistic sense.

Comemadre seems to be circling around a point within its second half. Instead of sociopathic doctors scheming to trick people into giving up their heads for science, we have artists dispassionately utilizing those parts for art. The attempt to connect the two falls flat. At one point we discover that a “modern-day” character is in fact related to Quintana. An artist wants to build a system of guillotines based on plans he’s found from the old sanatorium. It feels, paradoxically, simultaneously like being fed a cliché and not quite getting what the book is trying to say.

With clear prose, dark humor, and a sense of humanity tucked behind all the morbidity, Comemadre is an uneven novella with one classic scene and a grim reminder of the disintegration of the body and the even quicker decay of the morality of powerful men.