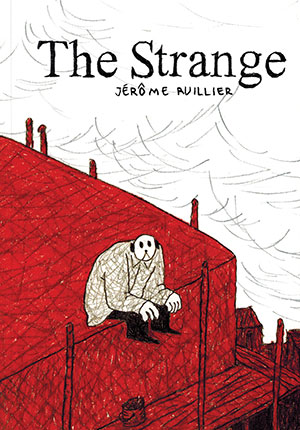 Jérôme Ruillier’s The Strange is the timely, and timeless, story of a fictional undocumented immigrant’s struggle to make a new life. Throughout this graphic novel, Ruillier interweaves accounts from those who determine the course of this man’s life, creating a story of simultaneous interconnectedness and isolation.

Ruillier was a children’s book illustrator early in his career, evident in the dynamic colored pencil drawings in The Strange. His first graphic novel, Le Coeur-enclume, came out in 2009. Les Mohamed was published in 2011, based on interviews with immigrants from North Africa. The Strange was first released in France in 2016 and is Ruillier’s first book translated into English.

The Strange follows the story of an unnamed immigrant from his home to a new country where he does not speak the language and stands out in a crowd. His days are consumed with fear, uncertainty, and loneliness. Ruillier draws the characters as anthropomorphized animals, which removes ethnic specificity, making the story more universal. Every page in Ruiller’s The Strange is black and white with a single-color accent, resulting in a stark and unsettling tone.

The Strange is reminiscent of Shaun Tan’s The Arrival, and both graphic novels poignantly capture the crippling alienation of an undocumented immigrant. The Strange is unique due to the range of perspectives that Ruillier creates, from the middleman who provides documents for the man to travel to bystanders like the passenger on the bus. Ruillier skillfully makes each perspective complex as the characters wrestle with compassion but almost always succumb to fear and bias. The exception is the “network,” a group of civilians who each play their own small role to fight for the immigrant’s rights.

The Strange is an unapologetic political statement about the dehumanizing treatment of immigrants. The book ends with a passage by Amnesty International, saying, “The condition of exile may vary in form and circumstance, but for those who experience it, it always involves a confrontation with otherness and difference.” The Strange is a study of a society that demonizes “the strange” on sight, failing immigrants and refugees across the world.