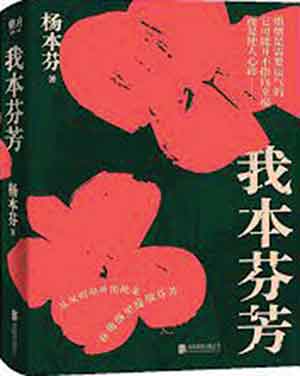 AS YANG BENFEN’S third novel published in three years, Wo Ben Fen Fang (I am rich in fragrance) garners no less attention and sends the female writer in her eighties once again into the spotlight. Her last two books, Qiu Yuan (Autumn garden) and Fu Mu (Driftwood) have been great successes in China. It’s hard to believe that she wrote this trilogy in her kitchen and didn’t publish any work until she turned eighty.

In plain and simple words, I Am Rich Fragrance is an autobiographical novel telling stories about common people’s chaotic marriages. The writer finally writes about her own life. Fragrance depicts the hardship of life, the nuisances of marriage, and the arguments between the protagonist, Huicai, and her husband. In the third-person narrative, readers are drawn closer to Huicai—the protagonist’s given name, which means virtuous and intelligent—while scrutinizing her husband, who is referred to as Lü, his surname reflecting the coldness and alienation condensed in this one-syllable address.

The historical environment brought these two young people together. Huicai, the damsel in distress, was rescued reluctantly by a doctor of suspicious nature, Lü. They were bound together to solve practical dilemmas. Family background, educational status, and personal interests—none of these elements were taken into consideration. Neither party of this innocent couple was willing to admit the calculation behind their hasty arrangement, which led to suspicion and bitterness, hatred and desperation. Their marriage is a prototype of millions of other marriages in their time, the marriages of many contemporary Chinese readers’ parents and grandparents.

Huicai and Lü barely talk to each other before marriage and even less after the simple wedding. In the first years of their marriage, the moments of their verbal exchange are when they fight fiercely. The bride traveled to Lü’s hometown without his company, met her parents-in-law for the first time, and surprised them with the news of their son getting married. As depicted in Yang’s first two works, she lived in an era of drastic social changes. It was extravagant to talk about love. Common people struggled to survive.

In those times, marriage might be a solution, but a happy one is a lottery. The lonely souls, which were supposed to warm and comfort each other, were hurt and broken in pieces after sixty years of living together. As in Yang’s other two books, Fragrance is scattered with vivid details of country life—the haunted house, barking dogs, and straws polished by the laying hens. Though happiness was out of reach in Huicai’s marriage, she managed to blossom from the ashes and to fill her little corner with sparkling fragrance.