The Celestial Hunter by Roberto Calasso 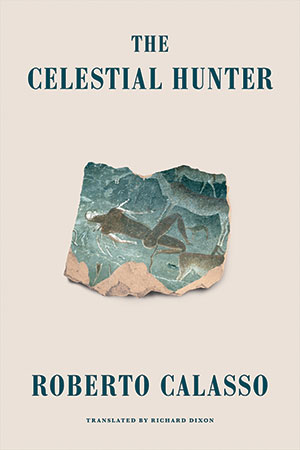 AS IN HIS STUDY of the ancient Vedics, Ardor, in The Celestial Hunter the Italian philologist and publisher Roberto Calasso takes his discipline to an extreme point. In a way, a prehistorical philology is a contradiction in terms. And indeed, The Celestial Hunter goes into the question of the genesis of history itself: what part of humanity was necessarily left behind, what remainder, before the human being could acquire the appropriate distance to assume the task of writing as well the birthright of a history? For this, Calasso looks to the emergence of the hunt. Like the other books of the ennealogy (the present volume stands as the eighth; 2019’s The Unnamable Present is its latest installment to date) that began with The Ruin of Kasch in 1983, sacrifice and its essential role in anthropogenesis is the subject. To Calasso, hunting is the paradigm of separation and distance, which is to say that from hunting—the union of hunter and prey—separation emerges. To become hunter, the human being had to imitate its own natural predators, and by this very mimicry overcomes the animal within—becomes human.

Indeed, Calasso’s book is the philological exploration of how the human being came to be through the act of hunting, came to be standing in opposition to nature and animal life as well as to the realm of the gods. The hunting human being divides, for the first time yet irrevocably, gods from animals; it is a rupture in reality itself. By underlining this discovery of distance at the very moment where distance is unbearable—in the hunt, in natural and human imitation, in substitution—and perhaps by his reliance of the master-concept of writing too, Calasso arrives at a Derridean understanding of humanity. For the French philosopher Jacques Derrida, our most crucial concepts are born of impossibility, and history is the rhythm and ritual of how we acknowledge this. Yet there are times also when humanity attacks the very essence of history and our separation from nature. This is the sacrifice without a remainder, as in Artemis’s feasts of slaughtering at the Laphria festival, a holocaust—all was burnt. In cases such as these, the logic of the hunt turns on the hunt itself. They ought to be illegible by necessity but remain so for Calasso, as he exposes the kernel at the beginning.

Polytheism may be Calasso’s element—and he invariably describes theoretical concepts as if divine, each with their own eros and pathos—but this work is about, and perhaps warns against, the emergence, with the first hunters, of a monotheist and modern modality of thought. Many such mythologies are covered in The Celestial Hunter. The rub remains with the question of the complete sacrifice, the sacrifice without a remainder. It certainly looks as if the hunter cannot make the transition to monotheism and, accordingly, even less so to the epoch of modern science and technology. One cannot hunt, Calasso states, without worshipping the divine animal, as one cannot hunt without taking part in the tradition of Orion. The hunt involves a logic of mimicry and substitution but also of fluidity; hunter and animal trade roles many times—Calasso provides a colorful lexicon for these exchanges. For Calasso, these mythologies mean the foundation for what he calls the culture of analogy, the categories of which our culture and thought heavily rely on.

Its fluidity stops, however, with the regimented theologies of the book. As Deleuze and Guattari observe in A Thousand Plateaus: “Theology is very strict on the following point: there are no werewolves, human beings cannot become animal.” And this is why theology offers no place for hunting, why it favors the shepherd, and why the skills that follow in hunting’s tracks, encompassing the entire culture of analogy, cannot thrive there either. Indeed, the complete sacrifice, of Artemis’s feast, sees the dawn of digital culture, wherein the remainder is efficiently dealt with. This is the connection that ties ancient mythology to our century of “tourists and terrorists” that Calasso will speak to in The Unnamable Present.