The Unnamable Present by Roberto Calasso 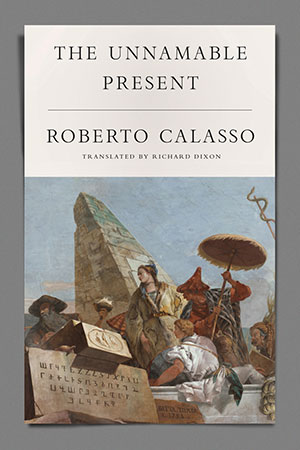 This book deals with the twenty-first century, the historical experience it accommodates in terms of terrorism, tourism, and information technology, and how these experiences emerge from its genocidal predecessor. Crucially, Roberto Calasso takes to task the contradictions between the high culture of analogy, which elsewhere he has connected to the imperative “to interpret infinitely, without a primum and without an end,” with, on one hand, a messianic drive to enact the analogy irrevocably and, on the other hand, a culture that embraces technology and progress—a digital culture that would see the entropy of analogy. In fact, to Calasso these two paths are closely related.

Calasso is an erudite of nineteenth-century proportions. His references are innumerable, and that is why, in selecting one as decisive, nothing is given away. Near the end of the first part, Calasso cites from an introduction Robert Frost wrote for Edwin Arlington Robinson’s 1935 collection of poems, King Jasper. Frost speaks about the difference between griefs and grievances. While grief is a patient pain, grievance is a pain that only articulates through a need for vengeance. On one hand, there is the call to avenge our grievances, in a mad and final “rush on the citadel of evil.” This is the call of revolutionary, utopia politics. From “Wall Street, the League of Nations, and the Vatican,” on the other hand, Frost hears the demand to give up on grief altogether, surrender all religious feeling and respect before the unknowable contingencies that condition our lives, and embrace science and progress. Indeed, when progress is assured, grief appears irrational. Yet Frost warns that progress is uncertain, and we may find ourselves disarming unilaterally before an enemy uninterested in winning a mere symbolic victory.

For the humanist Calasso, eminent historian and philologist, Frost’s dilemma is a real dead end, an aporia. There are no, nor can there be, humanist, historical, or philological resources to justify any attempt to overcome this issue, and Calasso mocks the transhumanists and their hang-up with death. We might wonder, however, what could have happened had Calasso engaged with the work of his compatriot and contemporary, the philosopher Giorgio Agamben. In Agamben’s analysis, subjectivity—to grief, guilt, law, and death—in the West is not an original metaphysical concept but the effect of a politico-juridical apparatus that keeps putting human life in an irreducible proximity to legal imputability. The urgency of Agamben’s project throws an entirely different light on Robert Frost’s messianic indecision. The patient and dignified grief that speaks through Frost and Calasso, the thinking of the analogy, is proudly free of dogmaticism, but, as Calasso himself conceded in his earlier La Folie Baudelaire, “You can simply ignore it. And this act of omission has a boundless power, like a blow delivered by a murderer.”

In The Unnamable Present, Calasso faces up to a world that has done away with his very element—the culture of analogy—as it has irrevocably committed to a digital, virtual reality. This book could very well record an analogist’s final guidance and implorations to that world.